Last week, references to a 9-pin mini dock connector were discovered in the beta code for the upcoming iOS 6.0 and today, AppleInsider is reporting through its reliable sources inside the supply chain that a new orientation independent 9-pin dock connector is indeed expected to make its debut on Apple’s new iPhone next month. The report claims that the new dock connector takes design cues from the Apple’s patented MagSafe adapters and will eventually replace the company’s legacy 30-pin connector that debuted on the third-generation iPod classic nearly 10 years ago. Furthermore, the new mini Dock Connector will deliver faster transfer rates with just a fraction of the number of electrical contacts as its predecessor, claim sources. 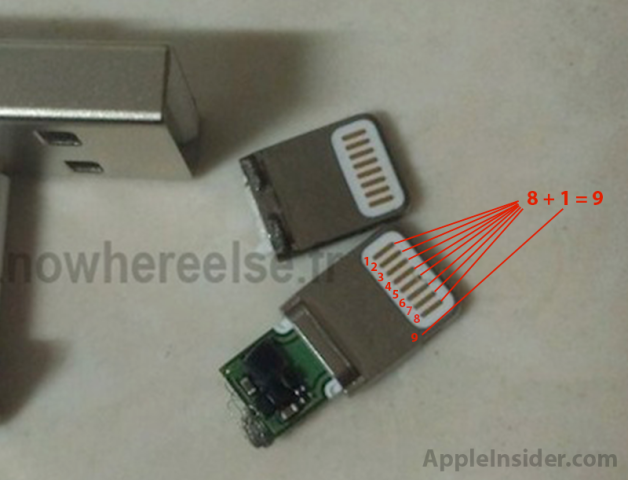 They say the 8 gold contacts seen on one side of the male plug in recently leaked photos of the connector are simply repeated on the flip side. They’re reportedly joined by the surrounding aluminum-colored metal shell of the connector, which will similarly serve as a functional contact, bringing the total number of pins to 9.

The new connector will also deliver a number of welcomed enhancements for consumers, according to people familiar with the design, one of which will be its orientation independence when plugged into any one of Apple’s future iOS devices.

“The beauty of this connector is that it no longer matters which side is up when you insert it into the phone,” one of those people explained. “It’s like MagSafe on the [MacBook] – every orientation is the correct one.”

The number of functional pins Apple planned to deploy with the new mini Dock connector has been a topic of debate ever since hollow enclosures believed to represent the next iPhone began surfacing with a Dock Connector recesses sized at approximately one-third that of the legacy 30-pin Connector.