iPhone 5 was 30% More Available Than the iPhone 4S

Apple was proud to announce that the iPhone 5 will have had the fastest rollout ever during the iPhone 5 keynote, and that they did reach 100 countries by the end of 2012. Horace Dediu of Asymco sought to find the answer to the question: How much did iPhone 5 availability increase, exactly?

Dediu goes deeper than country-level availability, because he doesn’t consider this metric ideal, as “countries vary greatly in their ability to absorb iPhones”. Just a quick example: It isn’t nearly as important announcing iPhone availability Mauritius as it is in Madagascar, he says.

This means the best way to measure is to track the populations which subscribe to operators who have a distribution contract with Apple. And this is exactly what the graph below shows. 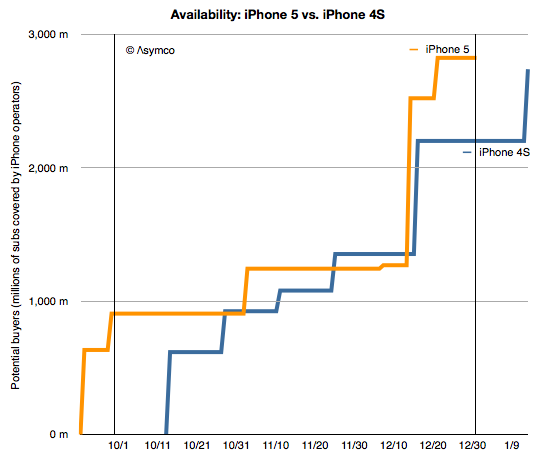 As a result, Dediu found that the iPhone 5 was 30% more available than the iPhone 4S, with China and Indonesia being the biggest contributors in the iPhone 5’s addressable market.

As the above graph shows, the increase in availability occurred both early and late in the quarter, with the early launch in the US and the December launch in China marking the process. It’s worth noting here that buying patterns differ between these two — Apple’s biggest — markets, which is mainly the result of the different festive seasons.

As a final note, Dediu emphasizes that increased availability doesn’t always lead to increased sales, but that supply shortages of the iPhone 5 could have resulted in higher demand.

Dropbox support has just confirmed that a public beta with full support for macOS will be released in Q4 this year, making the desktop app fully compatible with macOS 12.3 (Monterey). Dropbox users on macOS 12.3 see a compatibility warning about the Dropbox system extension, which results in users being unable to open online-only files stored...
Usman Qureshi
6 hours ago

WhatsApp has simplified the process of setting up Disappearing Messages by allowing users to set default Disappearing Messages for new and existing chats all at once. Users can now choose their duration timer and then select and apply it to whichever chats they want. For those who aren’t familiar, WhatsApp lets you send messages that disappear...
Usman Qureshi
6 hours ago