The latest report from ad firm Chitika shares insight into the web traffic volume of Apple’s iPhone 5 compared to the Samsung Galaxy S III. Based on their study of web usage rates, the iPhone 5 has surpassed the Galaxy S III in just 18 days based on mobile ad impressions between the 7-day period from October 3-9, resulting in the following graph: 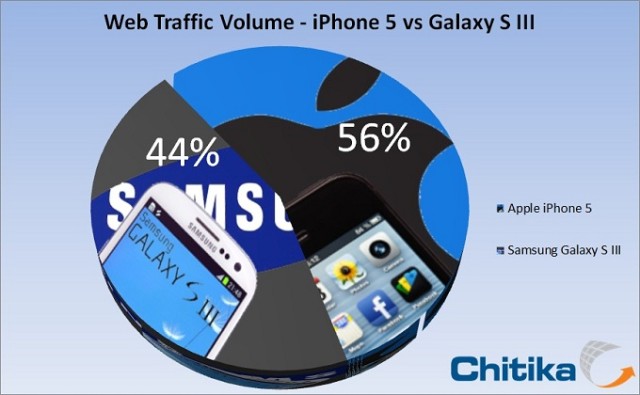 The iPhone 5 consisted of 56% of web traffic volumed compared to 44% via the Galaxy S III. Chitika concludes this is due to record iPhone 5 sales and new 4G LTE browsing speeds:

The Galaxy S III has been available in the U.S. for nearly four months, and posted impressive sales figures – even beating out domestic sales of the iPhone 4S in August 2012. However, only 18 days since the public release of the iPhone 5, the newest Apple device has overtaken the Galaxy S III in terms of Web traffic volume. Record-breaking sales numbers, along with new 4G browsing speeds which encourage data usage, are the most likely explanation for this tremendous growth.

Previous studies from Chitika noted 15% of users had updated to iOS 6 in 24 hours after its release, with that number growing to 60% two weeks later, a stark contrast to the adoption of the latest version of Android OS, which was only on 22% of compatible handsets at the time.