iPhone 5c Offers the Most Storage Space Out of the Box, Galaxy S4 the Least

According to a comparative study carried out by Which (via AppleInsider), both iPhone 5c and iPhone 5s offer the most advertised storage space out of the box, while Samsung’s Galaxy S4 offers the least. Among 16GB smartphones, the iPhone 5c ranks first among available storage with 12.6 gigabytes, while the Galaxy S4 comes in at last with just 8.56 gigabytes of its advertised storage space. 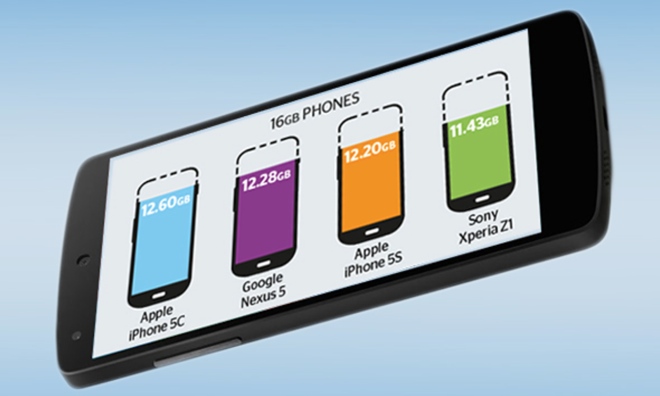 The source notes that while the analysis isn’t the first time Samsung has been called out for offering limited space, it is one of the first tests to include Apple’s latest iPhone 5s and iPhone 5c models.

One benefit the Galaxy S4 has over Apple’s iPhone lineup and even Google’s Nexus handset is the inclusion of an available microSD card slot. Galaxy users can buy their own card and insert it into the handset, boosting available storage by up to 64 gigabytes, while iPhone and Nexus 5 owners must stick with their original built-in storage.

However, Google has taken steps with the Android operating system to restrict usage of external storage, likely in an effort to ensure handset performance is not slowed. As a result, Android applications cannot be installed to external storage, and any inserted memory card can only be used to host media files and documents. That means Galaxy S4 owners are only left with 8.56 gigabytes to install applications — more than 4 gigabytes less than are available out of the box on Apple’s mid-range iPhone 5c.

Last year, when Samsung was taken to task over Galaxy S4 storage, the company responded by advising users to buy a microSD card.

The Canadian Radio-television and Telecommunications Commission (CRTC) wants feedback from Canadians on the proposed price increases on basic TV packages, beyond mandated price caps. The CRTC said on Wednesday the request for comments comes “in response to an application filed by a group of television service providers to increase the price cap for the basic […]
Gary Ng
50 mins ago