Prior to the official launch of the iPhone 5, purported early Geekbench results noted the A6 processor runs at 1.02GHz. That number was later confirmed to be true once the phone was released.

Now, according to Engadget, the latest version of Geekbench (build v.2.3.6) in the App Store now shows the A6 runs at 1.3GHz, as according to Primate Labs’ Jack Poole. 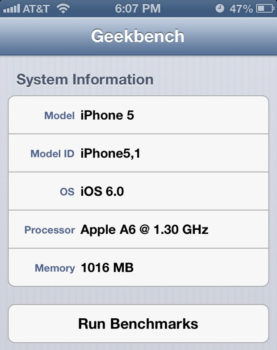 The updated app “features a dramatically improved processor frequency detection algorithm, which consistently reports the A6’s frequency as 1.3GHz.” The change was due to the fact older versions of Geekbench had difficulty identifying the A6’s clock speed. Version 2.3.6 shows the following update notes in the App Store:

Over at 9to5Mac, there is speculation the A6 can dynamically overclock and downclock, based on Geekbench results that show the A6 clock speed range from 550MHz-1.3GHz. We would assume this performance is part of the A6’s ability to manage power efficiently to maintain better battery life. 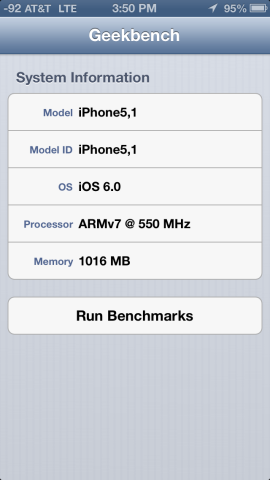