Here is a Global Price Map for iPhone 5S

Forbes has published a mapping of the global price list for iPhone 5S, to highlight how the prices of Apple’s latest flagship phone differ around the world. The publication claims that the data can be used to explore the violations of Ricardo’s Iron Law of One Price, which insists that the “prices of traded goods would inevitably move to being equal all over the world”, or equal minus the transport costs of getting them around the world. 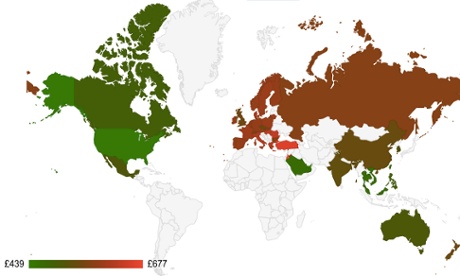 The source notes that transport costs for an iPhone are trivial. “It would be amazing if Apple were paying more than a couple of dollars to airfreight one to anywhere at all. So, we would expect prices to be the same everywhere”, but they obviously are not. Apparently the major reason for this is different governments. The prices used include sales taxes and those obviously vary in each taxing jurisdiction. There are also various places that have import taxes on electronics. So, that’s part of the iron law violation, governments imposing taxes.

“There’s also a second, much more minor one in there as well. Apple, just like every other company, operates at “price points”. No one at all goes out and sells something at $501. This might not be entirely rational but it is the way we humans see things, that $499 is much cheaper than $501. Certainly, we all act as if it’s much more than $2 cheaper. So price points are going to be at $499, perhaps $489, $449, instead of $451. However, Apple is selling in multiple currencies here and those psychological price points won’t be at the same price when converted into just the one currency.”

Another version of the information looks at the GDP of the country where the sale is being made. China is currently the most expensive with the iPhone 5S price being 9.55% of the average GDP, whereas the USA, Apple’s home country, is the cheapest standing at just 1.15%.