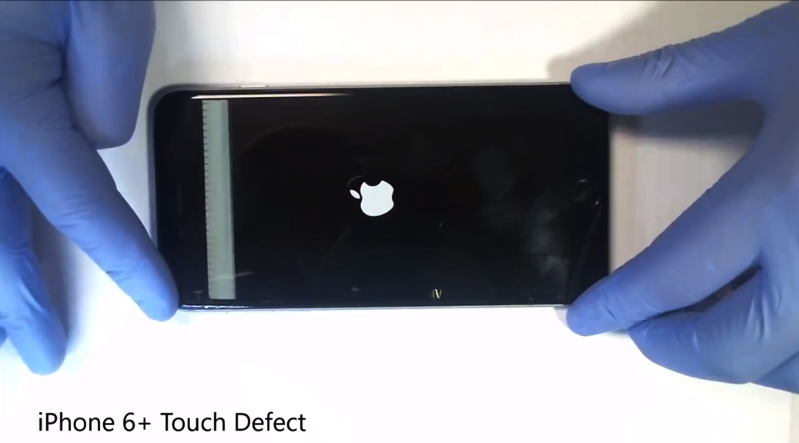 The iPhone 6 and 6 Plus’ structural design flaw, Bendgate (of course you remember that!) has an unanticipated, long-term consequence: Touch Disease, says iFixit. What’s that? It’s a grey, flickering bar at the top of the display and an unresponsive touchscreen.

In a blog post iFixit exposes the problem they say lots of repair shops worldwide encounter on a monthly basis. For example, a repair tech from New Orleans sees up to 100 iPhone 6 and 6 Plus devices a month that don’t respond well to touch, and about half of the repairs sent to another repair shop — Microsoldering.com — show the same aforementioned symptoms.

After looking into the matter and speaking with specialists, iFixit has discovered that the problem is not with the touchscreen, but it is the two touchscreen controller chips, or Touch IC chips located on the logic board of the iPhone 6 and 6 Plus.

In both the iPhone 6 and 6 Plus, the Touch IC chips connect to the logic board via an array of itty-bitty solder balls—“like a plate resting on marbles,” Jessa explains. Over time, as the phone flexes or twists slightly during normal use, those solder balls crack and start to lose contact with the board.

“At first, there may be no defect at all. Later you might notice that the screen is sometimes unresponsive, but it is quick to come back with a hard reset,” [microsoldering specialist] Jessa Jones explains. “As the crack deepens into a full separation of the chip-board bond, the periods of no touch function become more frequent.” Any drops or heavy handling keep chipping away at the cracked solder balls. Damage enough of them, and the connections between the chips and the logic board are severed, signals are lost, touch gets glitchier, and then goes away altogether.

Since Apple’s repair Geniuses aren’t equipped with proper tools to perform logic board repairs in-house, they aren’t able the fix the issue (called Touch Disease). The only way to avoid following their “advice” to buy a new iPhone is to get in touch with skilled third-party microsoldering specialists. The problem is they aren’t authorised by Apple to do repairs. They seem to be the only specialists who can fix this problem by replacing the two Touch IC chips for less than half of the cost of buying a new phone.

As pointed out by iFixit, the problem is limited to these two models, as Apple — despite not acknowledging the problem — moved the Touch IC chips off the logic boards onto the display assembly, possibly for sheltering them from the flexing forces the logic board is subjected to.

A board repair expert from New York City says we are facing a widespread issue, which will probably explode into a class action lawsuit, but for that to happen, customers with Touch Disease symptoms need to demand more support from Apple for this hardware issue.

Are you seeing the described symptoms of Touch Disease?