Apple introduced the iPhone 6 and 6 Plus this Tuesday, opening up a new chapter in the company’s history: it launched two different models, each with two display sizes. While both models have Retina HD display, the iPhone 6 has a display of 1334 x 750 pixels at 326 ppi, and the 5.5-inch version sports a 1920 x 1080 pixel, 401 ppi display. The new models substantially change the way graphics are rendered, and PaintCode has put together an infographic for us to better understand it.

Right after the first information leaks surfaced claiming that Apple would opt for a bigger, 4.7-inch and maybe 5.5-inch display, the next obvious question was: What resolution will that display(or displays) have?

So a wave of speculation and guesswork has started, but the most detailed explanation for Apple’s possible choices came from John Gruber before the Apple event.

While he tried to explain in plain English what Apple’s strategy would be, now that the iPhones are here, it is much easier to understand it in the light of the actual resolution the company opted for.

To get started, we need to understand what those “points” – often mentioned in iPhone resolution reports – are. As the infographic posted by the guys behind Paintcodeapp highlights, the coordinates of all drawings are specified in points. These are abstract units, which only make sense in that space, but in our case, the original iPhone’s points corresponded perfectly to the actual pixels on the screen (remember that 320 x 480 display?) Well, that’s no longer true.

You’ll find the rest of the explanation here. 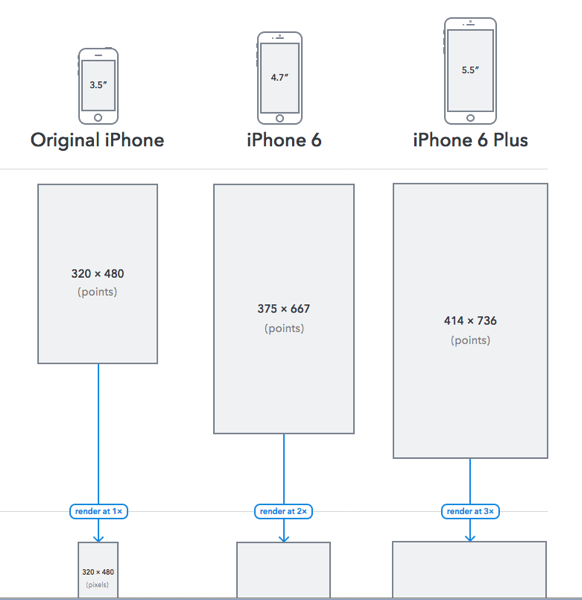