Are You Reading More on your iPhone 6 Plus vs your iPad?

Since the larger screened iPhones launched some have begun to wonder how will they affect iPad sales — especially the iPhone 6 Plus with its giant 5.5-inch display. Well, Pocket, the service for saving web articles for a later read on your mobile device, has the answer: the iPhone 6 is already taking away screen time from iPad (via Quartz).

After trawling through over 2 million articles and video openings, Pocket compared the behaviour of iPhone users before and after the upgrade to iPhone 6. What they have found is very interesting: the math proves that the iPhone 6 Plus is indeed influencing the way we view the written word.

Before the launch of the iPhone 6, 55% of the users read the articles on their iPhone 5/5s, while 45% used an iPad for reading.

This changed radically after the September launch, as of writing, 72% of the time spent reading is done on the iPhone 6, a huge jump from 55%, but this goes up to 80% when it comes to iPhone 6 Plus owners. Consequently, time spent on iPad drops to 28% and 20% respectively. 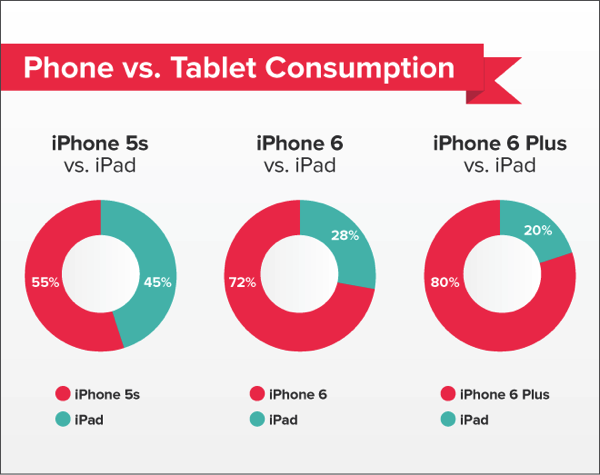 In fact, the bigger your phone’s screen, the more you’ll read / watch as a whole. We saw that users with both an iPhone and an iPad consumed significantly more content as soon as they upgraded to an iPhone 6 or 6 Plus. Those with the 6 now open 33% more articles and videos inside Pocket than they did with a 5/5S, and those with the 6 Plus open 65% more items than they did with a smaller phone.

That being said, there remains one place where tablets still hold reign: your nightstand. Regardless of which iPhone they have, users still reach for their iPads around 9pm for some late-night, bedtime reading.

Actually, with the iPhone 6 Plus the iPad’s nightmare is here: the bigger the phone, the more time you spend with it. In numbers: owners of the 5.5-inch iPhone spend 31% less time with their tablet during the week, and 36% less over the weekend.

During the 'Made by Google' launch event earlier today, Google unveiled an entirely new addition to its Pixel portfolio — Pixel Watch — and teased yet another one by previewing its first Android tablet, the Pixel Tablet, on stage. Pixel Tablet brings Google's Pixel experience to a much larger screen (although Google didn't say exactly...
Nehal Malik
3 mins ago