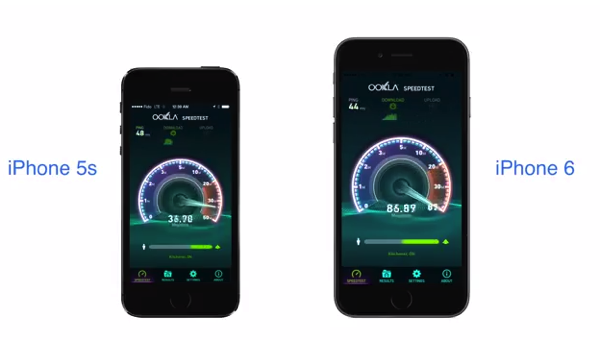 Following up on their iPhone 5s vs iPhone 6 Plus Wi-Fi speedtest, iClarified has now posted a video showing LTE download speeds compared on the Fido network, pitting the iPhone 5s vs the iPhone 6 using the Speedtest.net iOS app, which was recently updated for iOS 8:

For those interested, these tests were performed with the SpeedTest.net app for iPhone, in the middle of the night, in London, Ontario, Canada, using the Fido mobile phone carrier. The flicker on the iPhone 6 is an app issue which occurs when speeds reach a high level. It’s not a video capture issue.

The iPhone 6 and iPhone 6 Plus sport Qualcomm’s new MDM9625M LTE Category 4 modem, which advertises download speeds of up to 150 Mbps.

You can check and share your iPhone 6 LTE speedtests over in this previous post, which saw some ridiculous preliminary speeds of up to 133 Mbps on the Rogers network, when devices first became available. Last month, PCMag’s nationwide tests declared Rogers and Bell to have the ‘fastest’ wireless networks.

Have you seen LTE network speeds increase or decrease since the launch of the iPhone 6 and iPhone 6 Plus?