When Apple announced their new iPhone 6s and iPhone 6s Plus models, it was quickly revealed the new models are slightly heavier than their predecessors.

Many suspected the extra weight gain was from the new use of stronger 7000 series aluminum, but according to Apple’s Environmental Reports for each model, the gain comes from the new 3D Touch displays, reports The Verge:

It turns out the extra heft comes almost solely from that new 3D Touch display. The display assembly now weighs over twice as much as before. In the 6, the display used to weigh 12 grams — it now weighs 29 grams.

Take a look at the screenshots below, which show material use for iPhone 6 versus newer iPhone 6s models: 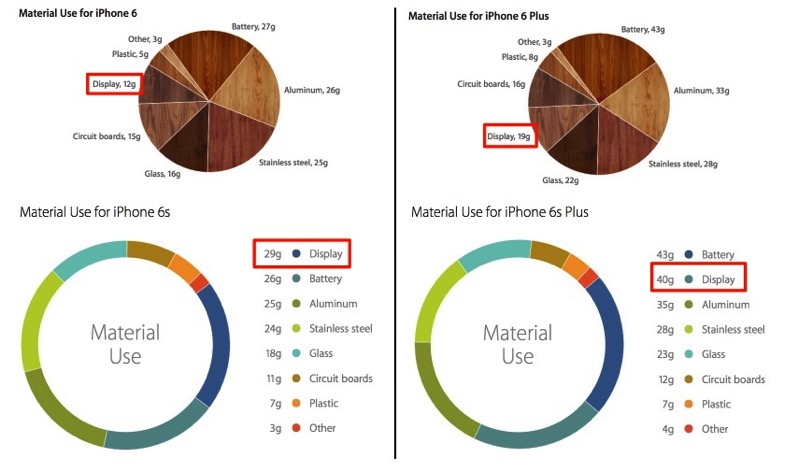 As for the iPhone 6s Plus, it went from 19 grams in its previous model to 40 grams, a gain of nearly 53%. These slight gains are due to the extra new capacitive pressure sensor built into the smartphone’s backlight display, for 3D Touch.

This is how Apple describes 3D Touch:

Using 3D Touch is simple. But the engineering behind it is incredibly advanced. When you press the display, capacitive sensors instantly measure microscopic changes in the distance between the cover glass and the backlight. iOS uses these measurements to provide fast, accurate, and continuous response to ?nger pressure, which could only happen with deep integration between software and hardware. iPhone 6s also provides you with responsive feedback in the form of subtle taps, letting you know that it’s sensing the pressure you’re applying.

So when you receive your iPhone 6s and iPhone 6s Plus on September 25, it may feel the slightest bit heavier compared to last year’s models, but probably not by a lot. But hey, you now have 3D Touch!

[via Apple Environmental Report for 6s and 6s Plus]