Will Canada Have iPhone 6s Reserve and Pick Up Online Again?

Last year, during the hoopla of midnight iPhone 6 pre-orders which wreaked havoc on Apple’s website, the company’s Reserve and Pick Up page went live and actually worked for some customers.

Reserve and Pick Up allows customers to choose their preferred model, then pick it up at their local Apple Store. Some customers were able to ‘change their minds’ at pick up and sign a contract with Rogers, TELUS and Bell instead of purchasing outright. This allowed some to get the devices faster than waiting outside ‘Big 3’ retail stores or dealing with long reservation wait times. Two-year contract iPhone 6s pricing for Rogers and Bell was revealed this morning.

The URL for Apple Canada’s Reserve and Pick Up page (bookmark this for later!) currently sits as a placeholder with the following “We’re sorry, but this service is currently unavailable” message. But it does have Apple’s iPhone 6s pictured, which hints it could come back this year (tonight). 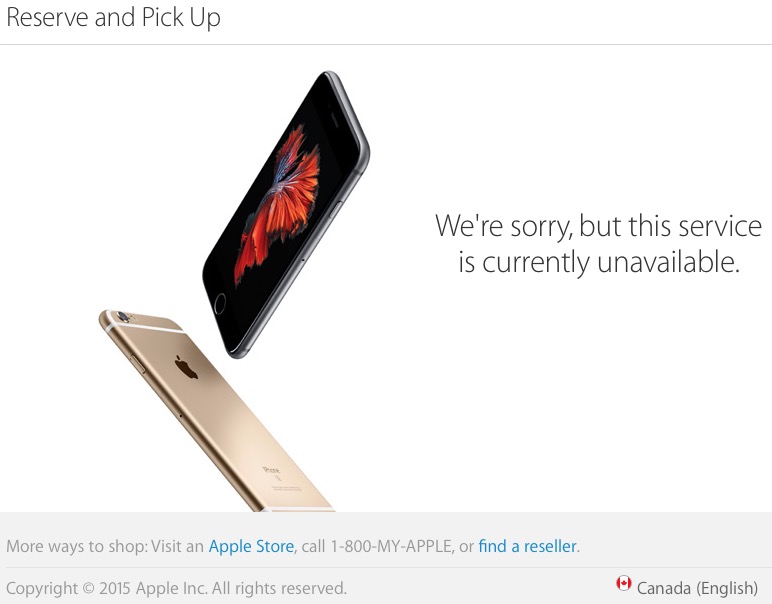 The best way to pre-order your unlocked iPhone 6s from Apple tonight is to use the company’s Apple Store iOS app, as it goes live faster than Apple’s online store, plus the checkout process is much easier.

We’ve reached out to Apple Canada for confirmation and will update this post shortly.