According to a recent survey carried out by RBC Capital Markets, the average selling prices of iPhone 7 models are higher than consensus estimates, The Street reports. 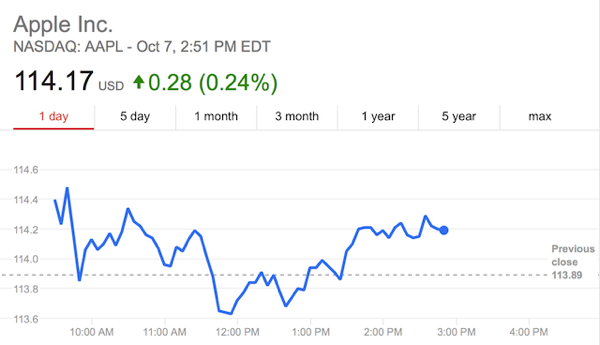 “While we realize expectations are getting high, we think Apple could show not only modest revenue upside in the September quarter, but more importantly, provide a more robust December-quarter guide that would be materially ahead of street expectations,” RBC stated.

Meanwhile, TheStreet Ratings team rates the Apple stock as a “buy” with a ratings score of B+, saying that it has objectively rated AAPL according to its “risk-adjusted” total return prospect over a 12-month investment horizon. “We feel Apple’s strengths outweigh the fact that the company has had sub par growth in net income”.

Shares of Apple were steady in pre-market trading on Friday after closing up on Thursday.

Apple's VP of Platform Architecture and Hardware Technologies Tim Millet and VP of Worldwide Product Marketing Bob Borchers recently sat down for an interview with TechCrunch where the pair talked about the tech giant's homemade M-series chips, gaming on Macs with Apple silicon, and more. Millet, who has been at Apple for almost 17 years and...
Nehal Malik
37 mins ago

The National Football League (NFL) and DAZN Group announced on Tuesday to extend their partnership in Canada and globally, with a new 10-year deal that begins with the 2023 season. With NFL Game Pass International, football fans outside the USA will be able to watch every NFL game through the regular season, postseason and the final […]
Gary Ng
47 mins ago