Images showing the alleged iPhone 7 and 7 Plus rear shell have been showing up for the past couple of months, with the shots getting clearer as we inch toward the expected launch date. Today, Italian blog Macitynet has shared a new image possibly showing the colour options available for the iPhone 7. 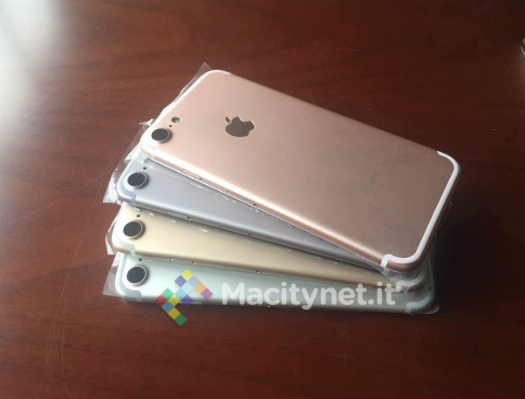 The image is said to show a mold for the 4.7-inch iPhone 7 – previous leaks have suggested the 5.5-inch model will come with a dual camera. This mold is used by case manufacturers as they prepare to launch accessories. As a result, the image could show the final colour versions of the handset, but there is a slight possibility that it doesn’t, so take it with a grain of salt.

What immediately captures the attention is the lack of the rumoured much darker Space Grey colour option, so it seems as though Apple won’t make that whispered change after all – at least not this year. Another idea is to limit that new colour option to the higher-end model, the iPhone 7 Plus (maybe Pro, as rumoured?).

As you can see, the above image doesn’t reveal any additional information we haven’t seen in the images leaked so far: The protruding camera remains a “feature” of the iPhone 7, except that the camera hole is much bigger now, and the antenna bands are now along the edges, as seen in previous images.