According to the Chicago Tribune’s recent radiofrequency radiation tests of 11 popular smartphones models from four different manufacturers, radiation exposure from Apple’s iPhone 7 measured over the legal safety limit and more than twice what Apple reported to the federal regulators from its own testing. 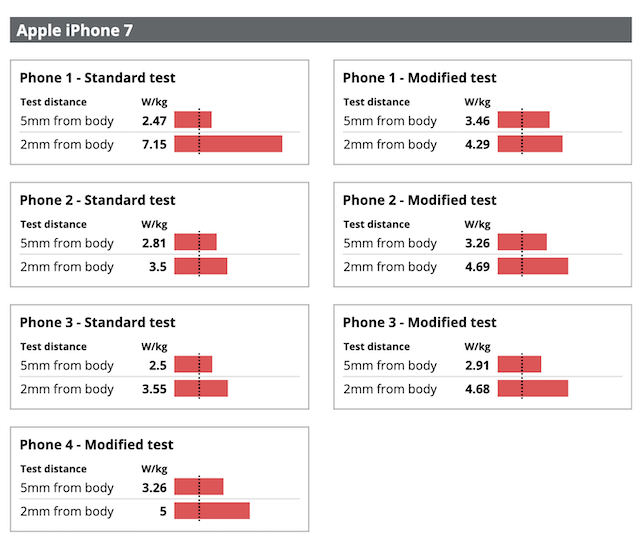 The publication tested three more brand-new iPhone 7s at full power and all of them measured over the exposure limit. After reviewing the lab reports from the tests, the Federal Communications Commission (FCC) said it will begin investigating the matter and will be conducting its own testing over the next couple of months.

It must be pointed out that FCC clearly states on its website that if a cellphone has been approved for sale, the device “will never exceed” the maximum allowable exposure limit.

“We take seriously any claims on non-compliance with the radiofrequency (RF) exposure standards and will be obtaining and testing the subject phones for compliance with FCC rules,” said FCC spokesman Neil Grace:

The Tribune’s testing, though limited, represents one of the most comprehensive independent investigations of its kind, and the results raise questions about whether cellphones always meet safety standards set up to protect the public.

Though it’s unclear whether radiofrequency radiation from cellphones can increase cancer risk or lead to other harm, that question is increasingly pressing given the widespread use of cellphones today. Many children and teenagers may face years of exposure.

Apple responded to the tests to say they “were inaccurate due to the test setup not being in accordance with procedures necessary to properly assess the iPhone models.”

“All iPhone models, including iPhone 7, are fully certified by the FCC and in every other country where iPhone is sold,” said Apple’s statement. “After careful review and subsequent validation of all iPhone models tested in the (Tribune) report, we confirmed we are in compliance and meet all applicable … exposure guidelines and limits.”

To find out more on how the tests were performed, hit up the source page.