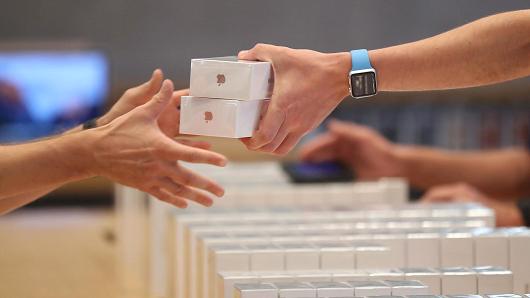 According to analysts in South Korea, Apple’s better-than-expected initial sales of the iPhone 7 may be due to Samsung’s recall of its Galaxy Note 7. IBK Investment & Securities analyst Lee Seung-woo said that Korean component vendors for Apple expected a volume of 80 to 85 million units, but this has jumped by nearly 25% to over 100 million by the end of the year, ZDNet is reporting.

“The order to stop using the Galaxy Note 7 and continuous incidents of them exploding in the US likely have leaned US consumers towards the iPhone,” said Lee, in a note to clients. “It is indisputable that the Galaxy Note 7 incident has become a huge plus for Apple.”

Kim Ji-san, analyst at Kiwoom Securities, predicts that the iPhone 7 will outsell the iPhone 6S. The latest phone was showing high popularity through online orders in the US and China.

Another South Korean analyst from Hi Investment & Securities added that Apple is on track to recover its top position in the high-premium smartphone market i.e. phones that cost over $600, thanks to iPhone 7 and iPhone 7 Plus. He continued that US wireless carriers are actively promoting the new iPhones following the Galaxy Note 7’s recall.

While Samsung gears up to resume its sales of the Galaxy Note 7 in the US on Wednesday, check out this real world speed test video of the iPhone 7 vs. the Note 7.