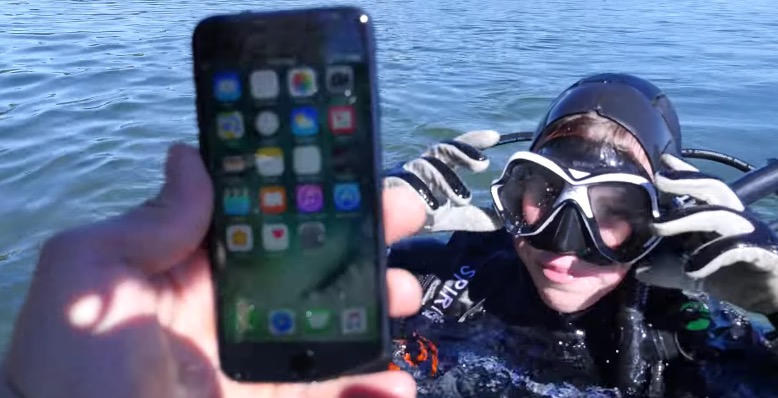 The naked Jet Black iPhone 7 goes into the water at various depths for 5-6 minutes at a time. The first depth is at one metre, which the device handles with no problem. The second depth is at 14-15  feet (4.5 metres), which again there are no issues, but at the third depth of 20-25 feet (6-7.6 metres), the iPhone starts to see water damage, visible in the display, while the Home button becomes unresponsive (Reachability still works though).

Throughout the tests, the iPhone 7 camera is rolling and capturing some pretty good footage in 4K.

Timothy Lake sits at 984 metres (3227 feet) above sea level, which definitely affected the water pressure in this unscientific test (somebody explain the physics!).

Also, an Apple Watch Series 2 was worn throughout the duration of the scuba dives, and was unaffected at all.

A previous test performed by the channel saw the iPhone 7 survive at 35 feet underwater. In a separate test by SquareTrade, the iPhone 7 was able to go surfing as well.

Food delivery service DoorDash has today announced a major change to the way it charges commissions to Canadian restaurants with a new, tiered model (via BNN Bloomberg). The company says its new tiered commission system will offer restaurants more "flexibility" and help them take advantage of digital growth opportunities. "Part of the thinking ... was to...
Usman Qureshi
15 mins ago

Google today announced its annual Year in Search trends for Canada, revealing what Canadian users searched for most during 2022. Year in Search is Google’s annual analysis of trillions of searches performed globally throughout the year. For the past 22 years, Year in Search has provided a unique look into what we all cared about, what...
Nehal Malik
47 mins ago