Apple’s iPhone 7 and 7 Plus were the most popular smartphones in the first quarter of 2017, according to Newton (MA)-based market research firm Strategy Analytics’ latest estimate.

While Apple doesn’t break down its iPhone sales by model, the firm estimates that the world’s biggest tech company has shipped 21.5 million iPhone 7 units and 17.4 million iPhone 7 Plus units, which gives Apple a combined 11% share of global smartphone shipments. 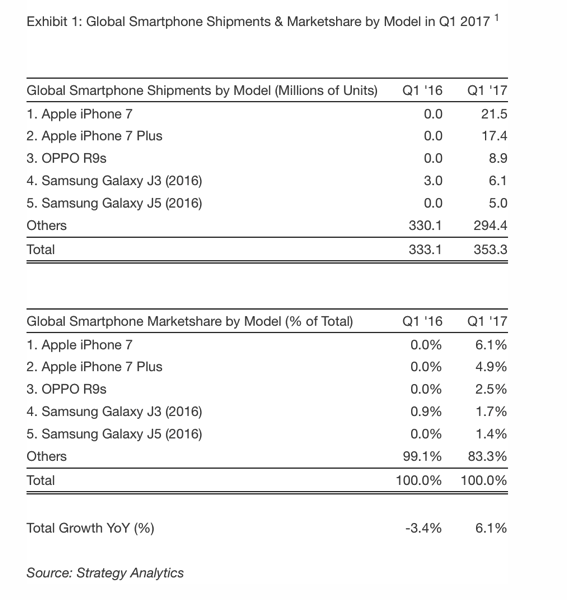 “The iPhone 7 is by far the world’s most popular smartphone model, due to a compelling blend of user-friendly design, extensive supporting apps and widespread retail availability for the device”, Juha Winter, Senior Analyst at Strategy Analytics, concluded.

Apple shipped a total of 50.8 million iPhones during the quarter, which means the older models accounted for 11.9 million units. The popularity of the iPhone 7 has propelled the model to a 6.1% share of the global market, while the bigger model accounted for 4.9% of the market, according to Strategy Analytics’ estimate.

The biggest performer, however, was the OPPO R9, which shipped 8.9 million units, and grabbed third place and a 3% market share worldwide in the first quarter, according to the firm. OPPO is unknown in the Western market, but it is popular in China and growing rapidly in India, according to Neil Mawston, Executive Director at Strategy Analytics.

As for Samsung, the smartphone maker managed to get two of its models into the top five: the J3 captured 2% of the global market, ranking fourth, and the Galaxy J5 1%, making it the fifth most popular handset. Overall, smartphone makers shipped 353.3 million units between January to end of March, Mawston said.