A newly leaked iPhone rear shell photo obtained by MacRumors via Chinese social network Sina Weibo, and later submitted to Slashleaks, seems to hint at a possible Ion-X glass display in the upcoming iPhone 7s or iPhone SE models. A closer look also reveals a “bump-less cutout for a single-lens camera”, with another cutout which might be for a vertically-aligned LED flash. 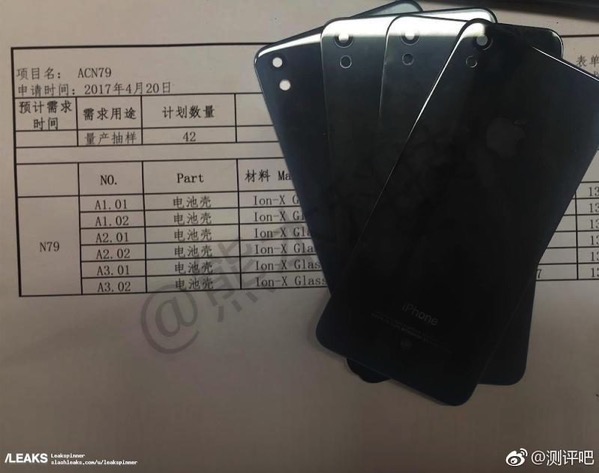 As pointed out by the source, the document seen in the photo suggests the iPhone codenamed N79 could have a strengthened Ion-X glass display like the Apple Watch. It is quite possible that the paperwork belongs to an Apple contract manufacturer, such as Foxconn, Pegatron, or Wistron.

There’s not much else that can be gleaned from the photo, asides from what appears to be more of an iPhone 7-like design, which would be a shift away from an iPhone 5s design if this is indeed for the iPhone SE as Slashleaks suggests.

This would be the first next-generation iPhone SE design rumor we’ve seen so far this year, so treat it with a healthy dose of skepticism.

It must be pointed out that according to KGI Securities analyst Ming-Chi Kuo, Apple is unlikely to release a new iPhone SE in the first half of 2017, suggesting a refresh won’t occur before the end of June. This also means Apple could be planning to unveil the next iPhone SE in September, alongside the iPhone 7s, iPhone 7s Plus, and iPhone 8.