According to the latest mobile phone retailers data from Ipsos Retail Performance, a firm that monitors high street footfall, the iPhone 8 saw one of the weakest Apple launches ever, with crowds at mobile operators’ stores increasing by just 10.2% month-on-month in the two weeks after the iPhone 8 hit the shops. 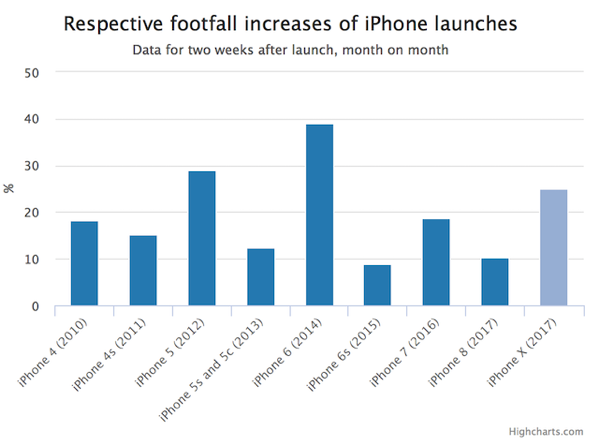 Meanwhile, the data has also confirmed that the iPhone 8, which is believed to be the second-weakest iPhone launch in the last eight years, is being upstaged by its more expensive sibling, the iPhone X (via The Telegraph). Ipsos is predicting an unusually-high level of demand for the iPhone X, with footfall in the two weeks following the launch set to be up 25% month-on-month, the third biggest rise on record.

Last year’s iPhone 7 resulted in an 18.8pc rise, while the iPhone 6 in 2014 led to a 39pc increase in footfall. If Ipsos’ predictions of a bumper iPhone X launch are accurate, it will prove to be the busiest release apart from the 6.

“Despite being just six weeks after the launch of the iPhone 8 in stores, we expect the X to attract crowds not seen since the arrival of the iPhone 6, four years ago,” Ipsos’ Tim Denison said.

It must be noted that Ipsos’ data, taken from electronic trackers installed at the entrances of mobile networks’ stores, does not include Apple’s own retail footprint, online sales or dedicated electronics shops.

Apple will provide the first official indication of iPhone 8 sales later today when it reports results for the three months to the end of September.