We’ve long heard of Apple’s next ‘iPhone 8’ to come with a curved OLED display, but as we head further into 2017, the question remains just how curved the next smartphone’s display will be.

MacRumors is now citing unnamed sources, which claim the rumoured 5.8-inch ‘iPhone 8’ will have an edge-to-edge display that will be mostly flat with just slightly curved edges, essentially eliminating the bezel area:

Apple’s widely rumored 5.8-inch iPhone with an edge-to-edge OLED display will be flat across the front of the smartphone, and slightly curved along the left and right edges to conform with the layer of 2.5D glass that covers the display, according to multiple people familiar with the matter.

The concept below for ‘iPhone X’ (on the right) demonstrates a 2.5D glass display, where the edges are slightly curved screen goes right to the edge, compared to the iPhone 7 screen and its black border: 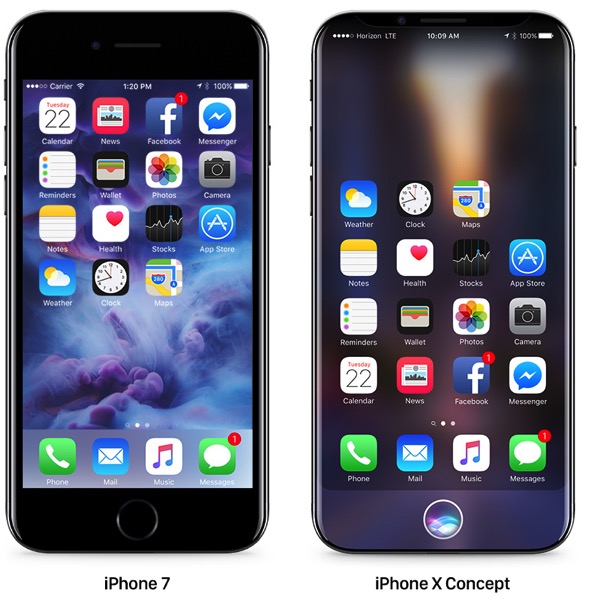 Yesterday, Nikkei reported the ‘iPhone 8’ display would have a curve that is “gentler than screens in Samsung’s Galaxy S7 Edge handsets.” MacRumors says it “has confirmed the report refers to a display that is slightly curved at the edges below 2.5D cover glass.” In a nutshell, there won’t be a display with a gimmicky curved edge like we’ve seen on the S7 Edge.

While the display would be 5.8-inches, viewing area would be roughly 5.2 inches according to KGI Securities analyst Ming-Chi Kuo, as the introduction of an embedded Home button and ‘function area’ will take up the bottom portion of the phone. The so-called ‘iPhone 8’ is estimated to start at $1,000 USD, due to the increase of costs related to OLED displays and more.