iPhone and Android Smartphone Prices Could Get Even Higher

A comprehensive article over at CNET has highlighted why iPhone and Android smartphone prices are about to get even higher, with a high probability of spending $1,000 for a phone becoming a new norm. With strong iPhone X sales, Apple proved that mainstream buyers are willing to pay as much for their phones as they would for a high-end notebook. 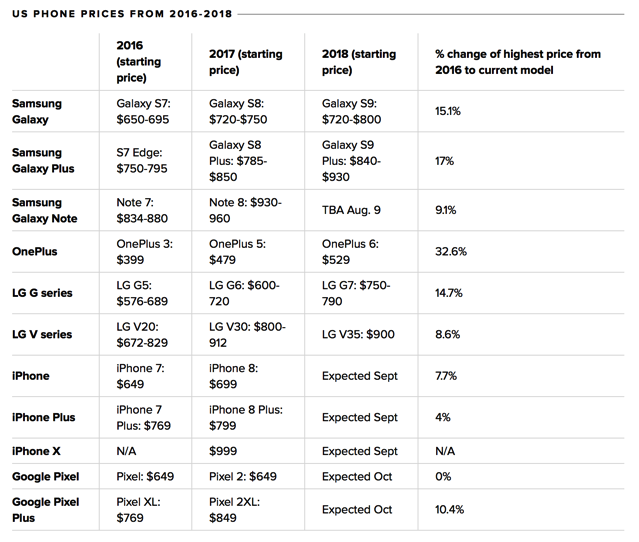 According to Ben Wood, the chief research analyst at CCS Insight, consumers are willing to pay a premium for a smartphone because “it is arguably the most important product in their lives”.

Apple is also not alone in boosting mobile phone prices ever higher. In fact, the cost of Samsung’s Galaxy phone has spiked 15.1% from the Galaxy S7 in 2016 to this year’s Galaxy S9. Similarly, the Huawei P series has climbed 33% in the last two years, whereas OnePlus phones now cost 32.6% more in the US and 42.6% more in the UK as compared to 2016.

“Rising prices aren’t unusual on their own. Faster, better components like processors and cameras cost more to make. The financial load of researching and developing new materials also gets folded into the final product. And inflation affects the cost of goods outside of tech, too.

But R&D spending and inflation don’t tell the entire story your phone’s creeping expense. By increasing the prices of their phones with each iteration, Apple, Samsung and other leaders in the industry are creating an ultra high-end segment that can make each sale more profitable — that’s important as people start holding on to their phones longer, for three years or more.”