iPhone App Store: Over 2 Billion Downloads With No End in Sight

Just this past summer, the iPhone App Store celebrated its one year anniversary. By that time, over 1 billion apps had been downloaded. Just two and half months later, Apple has announced that the App Store has surpassed over 2 billion app downloads. This number is just short of amazing.

Apple has mentioned that within their download numbers, that doesn’t include updates that people have downloaded. So if that is taken into consideration, app downloads would be even higher. Here’s what the App Store has accomplished so far:

– 85,000+ apps available to the more than 50 million iPhone and iPod Touch customers worldwide
– Over 125,000 developers in Appleâ€™s iPhone Developer Program
– 77 countries with access to the App Store and its 20 categories

Steve Jobs and Co. are literally laughing it up when it comes to the App Store, while their competitors are still struggling to even try and replicate the model:

â€œThe rate of App Store downloads continues to accelerate with users downloading a staggering two billion apps in just over a year, including more than half a billion apps this quarter alone,â€ said Steve Jobs, Appleâ€™s CEO. â€œThe App Store has reinvented what you can do with a mobile handheld device, and our users are clearly loving it.â€ 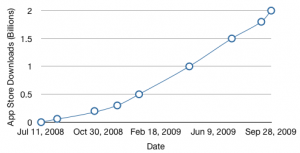 This really is an amazing feat to reach 2 billion downloads in such a short period of time. However, Apple did make it easy for iPhone developers to create wonderful apps and let them benefit from them. When do you think 3 billion downloads will arrive?