Though the number of affected users is small, some of those have become vocal, taking to online forums and support channels to discuss their experiences. Reported by MacRumors, a rather small handful of users using an iPhone with iOS 13.5.1 have been affected.

Through scouting Reddit threads and Apple’s support forum, users on several different iPhones have been experiencing this battery drain phenomenon. One Reddit user under the handle u/ritty84 posted a screenshot of his battery usage analytics. The screenshot shows this particular user’s battery has been using 95% of his usage over a small period of time. 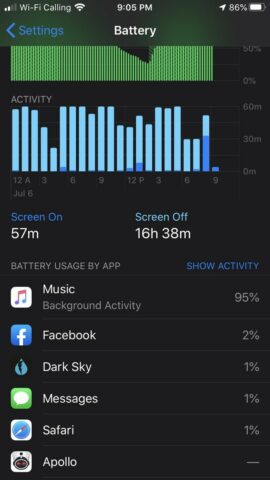 A dozen commenters chimed in, many claiming to have experienced the same issue in recent days. A similar occurrence happened on Apple’s support communities where a thread opened up by user Mr_woodpecker was met with many responses cataloging similar issues.

“I am having the same issue. My phone will be at 100% in the morning and will be at 20% by early afternoon. I even now am putting it in low power mode as soon as it is below 80% to help slow the drain but just realized today the music app, which is not even up and running on my phone, is draining the battery in the background throughout the day.”

While iOS 13.5.1 has been readily available for a couple of months, this significant increase in battery drainage could be a factor to some tweaking on Apple’s side. As of the time of writing, Apple has not made a formal statement regarding the matter.

Until a fix is made, some users have had to delete the app from their device as a remedy. Others have deleted, reinstalled the app, and shut off background activity for Apple Music. However, these are tedious remedies to the overall issue. Hopefully, Apple can pinpoint the bug and release an update in the coming days.

Amazon today announced at its special event an update to its best-sounding Echo speaker, the Echo Studio. This speaker is now available in Glacier White, joining Charcoal, while it also gets some enhanced audio technology updates, that will be available for all existing and new users. New custom spatial audio processing technology and frequency range […]
Gary Ng
6 mins ago

Apple's new Crash Detection feature, available on iPhone 14 and the company's latest Apple Watch models, is designed to automatically contact emergency services in the event of a severe car crash.  However, it can sometimes mistake a rollercoaster ride for a car crash (via Reddit). One Reddit user found this out the hard way when...
Nehal Malik
23 mins ago

Amazon announced on Wednesday a new lineup of Fire TV Omni televisions, this time with QLED and also its “smartest TV lineup ever.” The new Fire TV Omni QLED Series is available in 65 and 75-inches, with 4K Quantum Dot Technology (QLED) displays and full-array local dimming for up to 96 zones. Dolby Vision IQ […]
Gary Ng
26 mins ago