Hey everyone, if you haven’t already been tuning into our weekly iPhone in Canada podcasts, then you are missing out on some great iPhone info and chats! One important message I brought up to the listeners was the use of 3rd party iPhone car chargers and how buying them can brick your iPhone!

I received an email from fellow Canadian iPhone user Rico, who told me about his unfortunate situation with his iPhone and a 3rd party iPhone charger off eBay–even though it was advertised to work with the iPhone. In his own words,

“After plugging in my iphone, it just went black and overheated for about
30mins.  Right now, it won’t turn on anymore.”

In related news, I had a friend whose iPhone faced the same demise as Rico’s–a similar 3rd party car charger fried his iPhone too! So there you have it folks. Watch out for 8 in 1 car kit iPhone chargers on eBay, or any unofficial 3rd party car charger. They can fry your iPhone! Here’s a picture of the culprit involved: 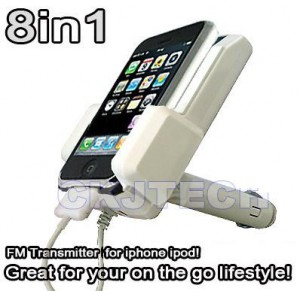 Anyone else get their iPhone brick’d by a car charger? Let us know in the iPhone in Canada forums!