The Huffington Post Alberta reports, Edmonton radio station Hot 107 posted a split photo that shows a man driving holding what looks like an iPhone. The second half of the photo shows cookies baked into the shape of an iPhone. These photos of an iPhone cookie baker, who admitted to cops that he was trolling, has prompted discussions on Facebook. 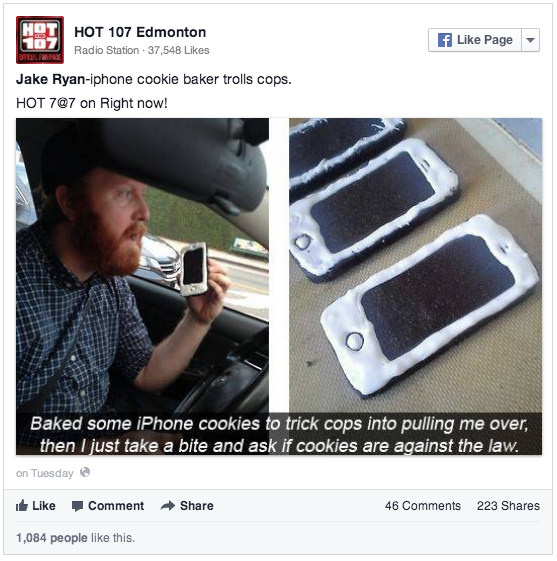 The image posted by Hot 107 Edmonton was by stunt comedian Randy Liedtke. The post is now filled with comments which admire the cookies but don’t admire the stunt.

However, the stunt may have educated some on the details of the distracted driving law. As people’s comments pointed out, eating while driving is also covered under the law. Eating a full meal while driving is against the law, just like using a cell phone, but eating a snack or drinking some water is not.

Whether the iPhone cookie counts as a snack or a full meal will most likely be up to a judge and jury to decide.

[caption id="attachment_389637" align="aligncenter" width="1024"] Image: OpenAI[/caption] ChatGPT creator OpenAI today announced the launch of a new "classifier" designed to detect machine-written text. "We’ve trained a classifier to distinguish between text written by a human and text written by AIs from a variety of providers," the company said. While the company's AI-powered chatbot has taken the...
Nehal Malik
20 mins ago