As you all know by now, Apple has released iPhone OS 3.0.1, to fix the SMS vulnerability issue. After this was released, jailbroken iPhone owners dug through the internets, to find out if they could update and re-jailbreak. News seem to pop up on Twitter, first, that redsn0w 0.8 could already jailbreak the new firmware. Then Cydia was updated with the news, and finally we got confirmation on the iPhone Dev Team’s official blog.

Did you ever wish there was an easier way to keep track of the ‘ole cat and mouse game? Well, the Dev Team have released an app, in Cydia that does just that. It is very simple. Just 3 tabs on the bottom: one for their official blog, one with their Twitter updates, and one showing their official torrent releases. Now it is easier than ever to keep up the latest jailbreak news. 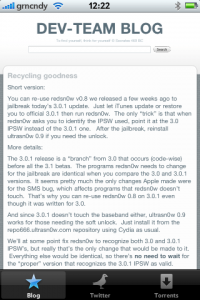 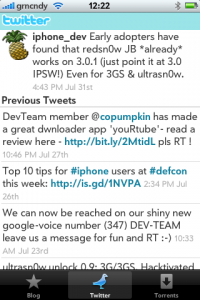 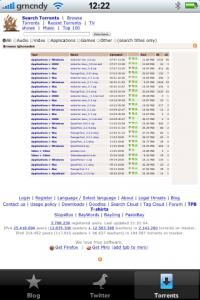 Thanks for reading my posts each Sunday. You can also read more of my stuff at my blog, Green Candy, and you can follow me on Twitter: @rorypiper.

I have also dabbled in adding some themes and tones to Cydia. If you want to find my stuff, just add this repo: http://apt.pwncenter.com, then search for Rory Piper. I have uploaded the lockscreen theme I made for iPhoneinCanada, and should be live, some time this week.