Here’s a pretty neat iPhone ‘Easter Egg’ I haven’t seen before. Do the following:

Voila. See, I wasn’t lying! Only the Google search result page for ’tilt’ is tilted, nothing else. Are Google engineers having some fun here, or Apple? 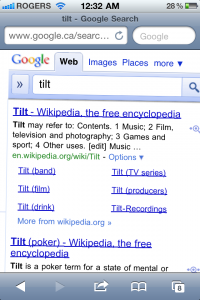