Mine Sweeper II is a new iPhone game that updates the classic Mine Sweeper with new music, graphics, and challenges.

Mine Sweeper II introduces new graphical explosions that rise above the playing grid including new music and sounds to make game play even better. You’ll also never play the same game twice as each game is uniquely generated from the developer’s “gold platform generator” which makes every level unique. 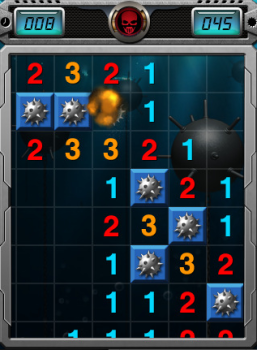 Controls are very simple and the game may be played with one hand. Simply tap on a squareÂ to reveal a part of the grid or tap and hold to flag or remove a flag from an area on the grid. You can further move the grid around by using multitouch gestures.

Mine Sweeper II also features OpenFeint support so you can challenge your friends and track your scores.

Mine Sweeper II is available in the App Store for $0.99.