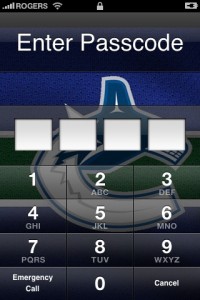 Protecting the contents of your iPhone with a passcode alone is not enough. German researchers were able to reveal an iPhone’s passcode in six minutes.

…the researchers first jailbreak the phone using existing software tools. They then install an SSH server on the iPhone that allows software to be run on the phone.The third step is to copy a keychain access script to the phone. The script uses system functions already in the phone to access the keychain entries and, as a final step, outputs the account details it discovers to the attacker.

The attack works because the cryptographic key on current iOS devices is based on material available within the device and is independent of the passcode, the researchers said. This means attackers with access to the phone can create the key from the phone in their possession without having to hack the encrypted and secret passcode.

Here’s a video of the attack:

No device is immune to an attack, but obviously it’s up to users to setup a passcode/password in the first place, and to always know where your iPhone is. Even with Find My iPhone, it can be easily disabled–if someone pops out your SIM card or turns on Airplane mode. At the end of the day, all companies need to work on security, especially Apple (remember this passcode flaw?).

What do you think of this video? Are you…scared?

1Password developers have just shared a preview of all the new features and improvements coming in their next major update, especially for iOS users. Reorder fields and sections inside items One of the biggest improvements in the forthcoming 1Password 8 update will be the ability to reorder fields and sections within items. "Just edit the item,...
Usman Qureshi
8 mins ago

Apple analyst Ming-Chi Kuo has today claimed in a series of tweets that only the highest-end 'iPhone 16 series’ model will feature a periscope camera lens next year. Earlier this month, a report by The Elec noted that the new periscope camera lens expected to debut this year exclusively in the iPhone 15 Pro Max will...
Usman Qureshi
33 mins ago

Instagram co-founders Kevin Systrom and Mike Krieger are making a return with a brand new project called ‘Artifact,' a personalized news feed driven by artificial intelligence. As noted by the Platformer, the app uses machine learning to understand your interests and will soon let you discuss those articles with friends. The company plans to let users in...
Usman Qureshi
54 mins ago