Buying an iPhone in Hong Kong is Easier “Outside” Apple Stores

At each of the three giant Apple Stores in Hong Kong, Apple enforces strict limits on the number of phones sold each day, with application process opening at 8 each morning. Everyday there are long queues that stretch the length of the stores which is why, a lot of buyers keep missing their chance. Turns out, buyers prepared to pay a 20-30% markup over the official retail price, can just walk “outside” the Apple Store and grab one from legions of iPhone “flippers” openly selling Apple’s smartphones. 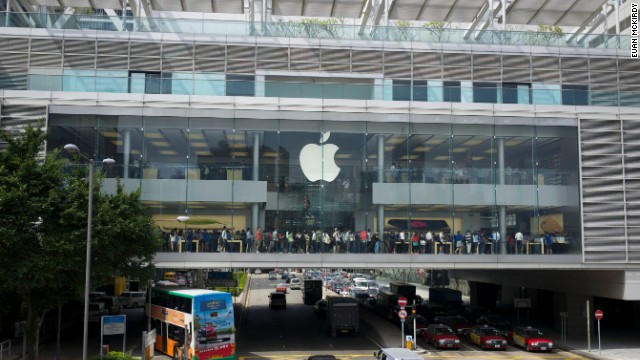 A new article published by CNN details exactly how Hong Kong’s iPhone gray market works. iPhone resellers use proxies like domestic labourers to buy up the phones for a small fee, bypassing the two-phone limit per customer, which is why there are plenty of iPhones for those willing to pay a premium. “They sit on cheap plastic chairs with their open suitcases beside them, stacked up with white boxes. Most of them have handwritten cardboard signs with the phones they have available”. The prices are not listed anywhere and if you ask them, they’ll just tap it into a calculator.

What they’re doing isn’t illegal, a nearby police officer tells me. It’s just consumer-to-consumer aftermarket sales. “Just like if I was to sell something to you,” he adds. And Apple’s own security, who patrol the street in black polo shirts, can’t do anything about the flagrant reselling right outside their store. “They’re on public property,” the officer says. “So they can’t get them to move.”

Some may consider it a win-win for Apple and cashed-up mainlanders, those left in the cold are the Hong Kong citizens who want to get their hands on a new iPhone the legitimate way from “inside” the Apple Store.