One British woman is lucky to be alive after being caught in the devastating Manchester terrorist attack that killed 22 people and injured more than 100 others on Monday, May 22. 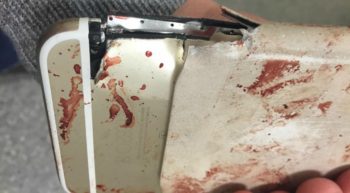 According to a new report from Independent, Lisa Bridgett, 45, was midway through a phone call when Salman Abedi detonated a bomb killing 22 people, injuring dozens others and sending a steel nut hurtling towards her head.

The nut sliced off her finger before deflecting off her iPhone and cut through her cheek before finally becoming lodged in her nose. According to her husband, she is “lucky to be alive” and the smashed phone shows just how lucky she was as it slowed the nut down and avoided a fatal injury.

“The fact she was on her phone at the time has probably saved her life…as the nut has hit her phone which has more than likely not only diverted it, but also slowed it down considerably,” he was quoted as saying.

The outer case of Apple’s iPhone 6S is made from aluminum, which appeals to manufacturers due to its malleable properties. Despite the fact iPhones are sleek in their design, the aluminum makes it very hard to break. Luckily, the iPhone’s sturdy construction prevented what would have certainly been something much worse for its user.

“All of us want to thank the police for their incredible work after the incident and all the staff at both the MRI [Manchester Royal Infirmary] and Wythenshawe for all the work they have done and are doing,” Bridgett’s husband said.

Citing two sources close to the Indian government, a report by CNBC News is claiming that India is exploring options to bring some of Apple’s iPad production to the country from China. The officials are said to be in discussions with Apple executives regarding the proposal, the sources said. The Cupertino giant, which has been producing...
Usman Qureshi
16 mins ago

Waze has today launched its first-ever dedicated app for cars, which will be available for select vehicles with Google built-in, starting with Renault Austral Hybrid and Renault Megane E-Tech. With this new experience, Renault drivers will have all Waze real-time routing, navigation and alerts, plus settings, preferences, and saved places, built into their car display....
Usman Qureshi
31 mins ago

[caption id="attachment_386668" align="aligncenter" width="800"] Image: Ledger[/caption] Tony Fadell, a famed product designer and former Apple Senior VP who is credited as being the "father of the iPod," has come out of his rather quiet life of investing and writing books about his career to lead the development of hardware cryptocurrency wallets at Paris-based Ledger. Cryptocurrency...
Nehal Malik
43 mins ago