Whether you’re using the original iPhone, iPhone 3G, or the latest iPhone 3GS, the recent iPhone OS 3.0 firmware update brings a whole bevy of features to your iPhone. As for figuring out which features are available to what model, that can be challenging to figure out.

We know that Apple has stated that certain features are “not possible” on certain models due to hardware limitations (which sounds silly when you consider something like the new Voice Commands and sending MMS–how much dependency is there on hardware??).

I’ve been asked on twitter by many folks “how do I activate MMS on my first gen iPhone?” Well, you can’t because it’s not featured! So let’s clear the air and take a look at this chart released by Apple: 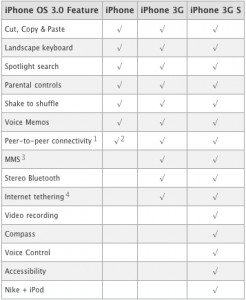 So there you have it. As you can see, features are limited to as the models evolve, in typical Apple fashion. Just think of the minor changes to the iPod lineup and you’ll know where I’m coming from. Either way, glad they are divulging this info up front to all of us!

What features do you feel you “should” have on your iPhone 2G/3G?