Word has gotten out that there will be an Apple Special Event on March 17th. What’s going to be announced? Well, for starters we will see a preview of iPhone OS 3.0! On top of this, there will be a new iPhone SDK. The event is going to take place at 10AM PST on Tuesday so mark your calendars!

What Do You Think Apple Will Announce with iPhone OS 3.0?

The iPhone has been out for almost two years now. In that time we’ve seen various firmware updates released by Apple, with some of the major announcements coming from firmware 2.0 which debuted the incredibly successful App Store. What can we expect to see in iPhone OS 3.0? 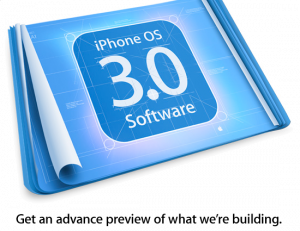 Rumors are out there that we might see MMS and tethering via Bluetooth and USB. But honestly…MMS?! Who still sends MMS messages? Most people email pictures if they want to send and regarding tethering using Bluetooth and USB, I’d be interested to learn more about that. It will be interesting if these rumors become a reality, but until then let the speculation run rampant.

In a perfect world, we might see the following announced (my wishlist):
– copy and paste
– push notifications
– ability to run multiple apps simultaneously
– wireless sync over WiFi
– forwarding of SMS
– new ringtones/notification sounds; better handling of notifications
– increased battery life (this is possible; remember the 1.x.x firmwares?)
– video recording
– ability to “mark all as read” in Mail
– iPhone themes
– debut of Flash??

If Apple were to introduce some new features, it might make jailbreaking seem less appealing to people. Sure, it’s fun and all but it does take some time and dedication to get it done. However, jailbreaking is the only way to unlock your iPhone 3G at this point in time.

Nevertheless, March 17th can’t come soon enough! What would you like to see from OS 3.0? Let us know by responding to this thread in the iPhone in Canada Forums, or post a comment!