New Data Shows iPhone Owners are the Most Loyal 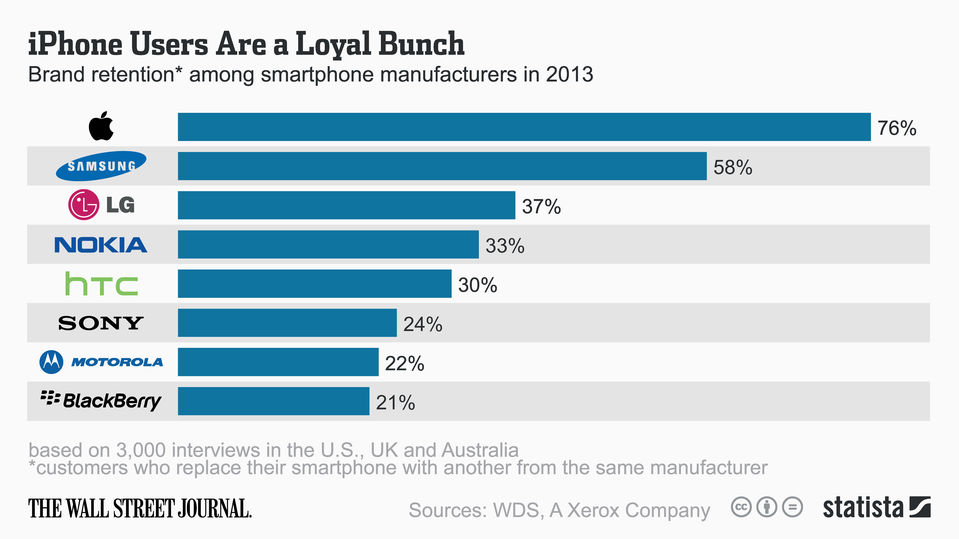 Looking at the latest data from WDS that was compiled by Statista, it is clear that Apple is way ahead of the competition when it comes to brand retention. According to The Wall Street Journal’s report, iPhone owners were found to be the most loyal among 3000 people surveyed in the U.S., United Kingdom and Australia.

Based on 3,000 interviews in the U.S., UK and Australia, 76% said they stuck with an Apple smartphone.

That makes sense: While Apple customers tend to be quite happy with iDevices, once someone puts down roots in the iOS ecosystem there is nowhere else to go.

While 76% of iPhone users said that they would replace their current smartphone with another iPhone, Samsung also managed to get a pretty good retention rate of 58%. LG came in at third spot with 37% retention rate, followed by Nokia, HTC, Sony, Motorola and BlackBerry.

In contrast to iOS users, it’s much easier for someone in the Android world to switch from Samsung to Nexus or HTC devices. In that light, Samsung’s retention rate is a pretty good number, don’t you think?