iPhone Radiation: Should You Be Worried?

Where do you carry your iPhone, or your cellphone for that matter? Do you carry it in your pants pocket? Or maybe it hangs out on your belt in a holster all day long? With all of these wireless devices getting more powerful by the day, how are the radiation levels?

iPhone Radiation Levels–Something to Think About

Recently a study was done by the Environmental Working Group that analyzed the Specific Absorption Rate (SAR) of the latest cellphones out there. According to an explanation from Wired:

The Federal Communications Commission sets the acceptable U.S. radiation standards for cellphones. The effects of the radiation depend on the rate at which energy is absorbed by a mass of tissue. This is called as the Specific Absorption Rate (SAR) and measured in watts per kilogram (W/kg). Most handset makers use private certification companies to test the SAR on their devices.

Based on a recommendation from industry group, IEEE, the FCC limits SAR levels for partial-body exposure (including head) to up to 1.6 W/kg, and whole body exposure to up to 0.08 W/kg. For hands, wrists, feet, and ankles, the limit is up to 4 W/kg, averaged over 10 grams of tissue.

So the lower the SAR rating, the safer the phone should be right? How did our family of iPhones fare? Let’s find out the levels below (phone held at ear): 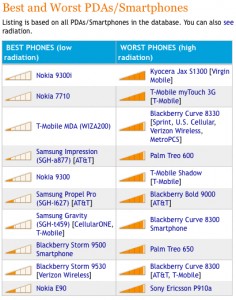 So there you go, as you can see the first gen iPhone has the lowest rating, then the 3GS, then the 3G at the highest level. The Palm Pre is actually pretty decent–too bad it’s with Bell though. Watch out 3G owners, time to start using your wired headset a bit more, eh? 😉

What’s the Safest Phone for Me to Use?

The best phone on the EWG list was the Samsung Impression at 0.35 W/KG. For phones that are rare and discontinued, you can’t go wrong with the Nokia 9300i which has a low 0.21 W/KG (in other words, this Nokia uses the old two tin cans and a string for connections). Look at the size of the screen on this bad boy: 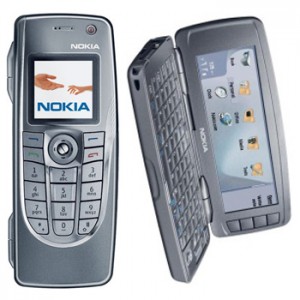 The study mentioned that users with 10+ years of cellphone use are more susceptible to tumors. I can only imagine the amount of time today’s younger generation will spend on their cellphones during school and more. Forget about the kids, even we are at risk!

We need to all be more conscious of how much time we spend talking on our phones and how close they are when we’re sleeping and carrying them around town (like on a belt, doh!).

Think about it this way: the less time you spend talking on your iPhone, you’ll be saving your health AND your wallet. How? Well, by talking less you’ll be reducing the chances of incurring hefty Rogers overages on your monthly bill! Now if that isn’t reason enough, then I don’t know what is. 😉

Anyone else been wondering about smartphone radiation levels, specifically the iPhone?