Previously we have written about how to type 40WPM on your iPhone and also tried a Swype vs iPhone speed test. But how does the iPhone’s keyboard compare to other devices, such as a pen and paper, keyboard, Apple Newton, Palm Graffiti and Treo?

Phil Gyford performed an interesting test putting all of these writing methods to the test. Surprisingly enough, from Phil’s results the iPhone ended up being second only to his computer keyboard. He typed the following 221 word passage in his test:

As you can see from the following infographic, here were Phil’s results: 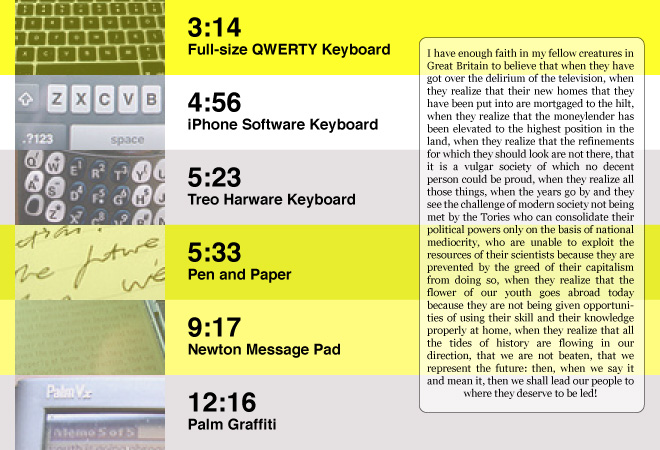 I found these results interesting and decided to try it out myself. I concentrated my tests on the keyboard and iPhone tests to see how I would compare. I would call myself a pretty good typist on the iPhone, but was I able to even come close to Phil’s blistering time of just under 5 minutes? Here are my results:

As you can see, Phil was a minute and a half faster than my time. I found that since I had not memorized the passage like Phil did, I had to keep on looking up to see what to type next. So for the second test I split up the passage into 5 smaller chunks to make up for the lack of memorization. It helped me improve my time, but I still would find it hard to shave off another 1 minute and 30 seconds.

How fast can you type on your iPhone? On your lunch break, type out the passage above and let me know what your time is compared to Phil’s time and mine. I used this online stopwatch to time my test. The fastest time gets bragging rights!