Apple has had an amazing second (fiscal) 2014 quarter, the iPhone selling 43.7 million units between January and the end of March. But how did it perform in the US market? Consumer Intelligence Research Partners (CIRP) has some answers.

The iPhone accounts for 43% of all smartphone activations, while Samsung holds 29%, and LG 12%, according to a survey conducted by CIRP. Samsung and Apple together dominate the US smartphone market with a combined 72%. 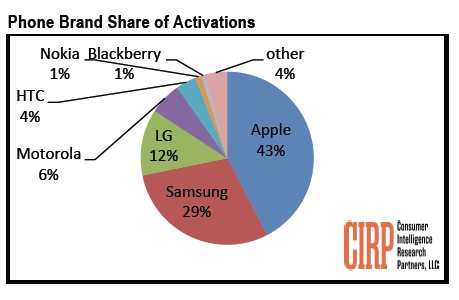 “Apple led the market, but still saw its share of US sales decline to 42% from 48% last quarter – the first full quarter of iPhone 5S and 5C sales,” said Josh Lowitz, Partner and Co-Founder of CIRP. “Samsung was fairly steady and LG saw a strong single quarter increase from 8% to 13% share of phone sales.”

What draws the attention, though, is the iPhone’s “magnetic” power that attracts customers from other brands. During the second fiscal quarter, the iPhone was the choice of 42% of smartphone users who had owned at least one smartphone in the past.

CIRP’s findings are based on a survey of 500 US smartphone buyers who activated a smartphone between January and the end of March. The survey was conducted between April 1 and 6, 2014.