The U.S. Patent and Trademark Office has today granted a new Apple patent titled “Electronic devices with sidewall displays” which according to AppleInsider, describes a method of positioning flexible displays around the sidewalls of a portable device. The filing hints at Apple’s intentions to introduce sidewall displays with virtual buttons in its future generation iPhones. 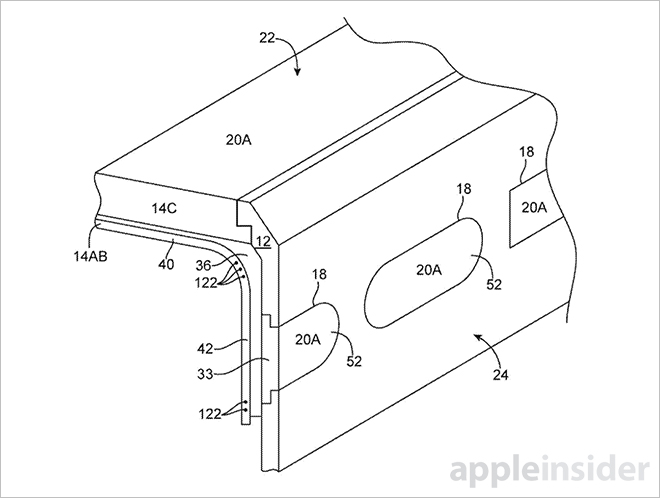 The source details that Apple could feasibly implement this new intellectual property in a near-future smartphone. The invention basicallyconsists of one or more flexible display layers disposed beneath a clear plastic or glass housing. Interactive or touch sensitive portions of the side displays can be left uncovered, while non-functional portions carrying circuitry may be masked. All sidewall displays may be outfitted with gesture-capable touch elements, further enhancing their capabilities.

“By extending an iPhone’s touchscreen to the edges of the device, users are afforded an expanded input interface that frees up space on the main screen. At the same time, the extra display real estate can be customized to show a variety of interactive virtual controls and features not possible with static physical buttons.

In some embodiments, the sidewall displays are assigned roles accessible in certain scenarios. For example, a number of app icons may be displayed when a user turns their phone on its side, or scientific functions may appear when a calculator app is in operation. Alternative uses include slide-to-unlock functionality, music player controls, messaging readout, caller ID and system controls, among many more.”

Even though Apple may not bring out an ‘iPhone 6’ with sidewall displays or flexible OLED screens, companies like LG and Samsung are already using flexible display technology in smartphones, though their designs are more of a novelty than they are useful.