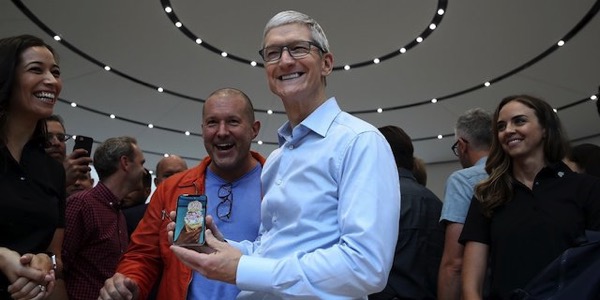 Apple’s shares hit a record high during trading today, thanks to the Wallstreet analysts downplaying concerns about Apple’s iPhone X production issues. With 31 of 38 brokerages rating the Apple stock (AAPL) “buy” or higher, their median price target of $180 projects a market cap of nearly $930 billion for the Cupertino giant (via Reuters).

“Positive commentary from analysts on Monday signaled strong demand for the pricey device with pre-orders starting this past Friday.

The stock climbed to $168.07 earlier in the session, adding nearly $26 billion to its market cap and inching it closer to becoming the first company with a trillion dollar valuation. Shares pared gains and were up 1.9 percent at $166.15 mid-day.”

Apple’s stock had fallen nearly 2.5% since the launch of the iPhone 8 and 8 Plus until last Thursday’s close. They rebounded on Friday after Apple announced that pre-orders for the 10th anniversary phone were “off the charts”. Daniel Ives, a well-known sector analyst, raised his forecast on Monday for pre-orders by 10 million, and several other analysts talked up sales over the next year.

“With the official launch of iPhone X in Apple retail stores slated for this Friday, Nov. 3, we anticipate very high demand globally with limited supply of iPhone X on hand,” Ives said.

The iPhone maker is scheduled to report its quarterly results this Thursday. And although it does not provide pre-order figures on iPhones any more, it will provide sales figures in its results.