iPhoneinCanada.ca is a 2nd Place Winner at the 2011 Canadian Weblog Awards 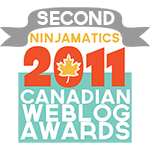 Last week we announced we won the 2011 Canadian Blog Award for ‘Best Tech Blog’, a process that involved voting by the public.

This week, we’re proud to announce we earned 2nd place in the ‘Best Media & Journalism’ category at the 2011 Ninjamatics Canadian Weblog Awards (similar name, I know). This complex process consisted of judges looking over blogs based on specific criteria, rather than random voting:

Over the past year, the Ninjamatics’ 2011 Canadian Weblog Awards saw 461 nominations across 37 categories. Our 46 volunteer jurors have worked hard over the course of this January using our ten criteria to judge each of the 461 weblogs in the first round and each of the approximately 175 in the second round to arrive at our winning weblogs. Our jurors have been a flexible and generous group, and I am thrilled to have been able to work with them over the last month. They are what make this Awards possible as a tool to promote weblogs of quality across Canada regardless of popularity

We were nominated into the following category and came out in second place:

Boom! We couldn’t have done it without the support of you guys and gals, our readers. On behalf of the entire iPhoneinCanada.ca team, thanks! We have some big announcements coming soon, so stay tuned.

[caption id="attachment_389637" align="aligncenter" width="1024"] Image: OpenAI[/caption] ChatGPT creator OpenAI today announced the launch of a new "classifier" designed to detect machine-written text. "We’ve trained a classifier to distinguish between text written by a human and text written by AIs from a variety of providers," the company said. While the company's AI-powered chatbot has taken the...
Nehal Malik
49 mins ago