iPhoneinCanada.ca Has Partnered with PriceCanada.com!

How many of you out there are addicted to the Canadian deals site, RedFlagDeals.com (aka RFD)? If you’ve never been to RFD, you might not want to visit because the site is slightly evil. Why? Because RFD helps you save money by spending money on the hottest deals for things you don’t really need. If you’re a RFD addict, you’ll know where I’m coming from!

Introducing Our Partnership with PriceCanada.com 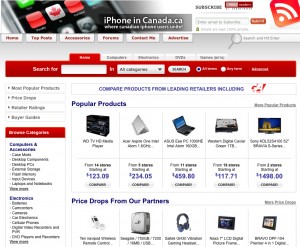 If you’ve enjoyed reading our blog and want to support us, feel free to use the our PriceCanada.com search portal. Enjoy the deals! 🙂

Apple is moving the production of its Apple Watch and MacBook to Vietnam for the very first time. In an effort to further diversify its supply chain, Apple is working with its suppliers in order to manufacture two of its pivotal devices outside of China. According to Nikkei, Apple suppliers Luxshare Precision Industry and Foxconn...
Steve Vegvari
40 mins ago