Apple’s record third (fiscal) quarter with 47.5 million iPhones sold has, according to the latest data from Strategy Analytics, propelled its global market share to 10.9%. However, the biggest gains in this period were recorded from Huawei, which emerged as the third largest mobile phone vendor in the June quarter, the market research firm highlights.

According to Strategy Analytics, smartphone vendors have shipped a total of 434.6 million units between April and June (both feature phones and smartphones). Another market research company, Juniper Research, in contrast, estimates only 338 million units, not to mention International Data Corporation (IDC), which estimates the total shipments to 337.2 million smartphones (Juniper’s data seems to mirror this).

Thanks to the successful iPhone 6 and 6 Plus models, the iPhone has grown 35% year-over-year, while Samsung has lost market share, with its shipment numbers dropping 7% annually to 89 million units worldwide. That gives Samsung a fifth of the global market. 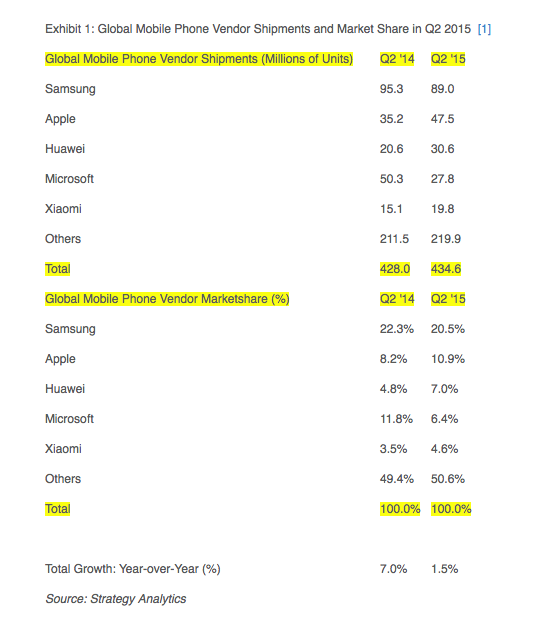 The Juniper Research report estimates a growth of 16% annually, while the Strategy Analytics report suggests around 1.5%. Smartphones accounted for 8 out of 10 total mobile shipments during the quarter. If we subtract the feature phones from Strategy Analytics’ report we get about 340+ million smartphone units.

While Sam Smith, marketing executive of Juniper Research, didn’t specifically comment on analyst numbers and methodologies, in an email sent to iPhone in Canada he did point out that the firm maintains a number of detailed internal databases and metrics, which form the basis for our suite of forecasts for smartphones. Central to these forecasts will be annual shipments of smartphones divided by vendors and region.

It is worth noting that when actual shipment data is not available from vendors, Juniper estimates them based on a number of performance indicators including sales revenue, ASP, growth rates, regional performance etc.

Both firms agree, however, that the biggest winner of the past quarter was Huawei, which recorded nearly 50% growth thanks to the launch of P8. Microsoft, however, slipped to fourth place of the top five global phone vendor list, and Xiaomi closes the list.

Recently released iOS 16.3 has fixed an Apple Maps security bug that may have allowed some apps to collect user location data without permission, 9to5Mac reports. Last week, Apple released iOS 16.3 and iPadOS 16.3 with a bunch of new features including: Support for physical security keys as part of the two-factor authentication sign in...
Usman Qureshi
14 mins ago

Apple has launched MLS Season Pass globally on the Apple TV app, ahead of the 2023 season that kicks off on February 25, 2023. An MLS Season Pass will provide fans all MLS and Leagues Cup matches, plus hundreds of MLS NEXT Pro and MLS NEXT games as well. Apple says there’s some free on-demand […]
Gary Ng
39 mins ago

Anker has finally broken its silence on the eufy Security fiasco. eufy is Anker's privacy-centric smart home security brand, which landed in scalding hot water after its always-encrypted, local storage-only surveillance cameras were found to be streaming unencrypted live footage that could be accessed through a simple media player. Responding to many calls for answers...
Nehal Malik
41 mins ago