The most-used phones of 2013 are the iPhone 4, iPhone 4S, and iPhone 5, but Samsung is right behind with its high-end devices, the Galaxy S2, S3, and S4, as Actix, a market research company tracking communications between mobile devices and carriers’ mobile networks, highlights in its latest research (via CNET). 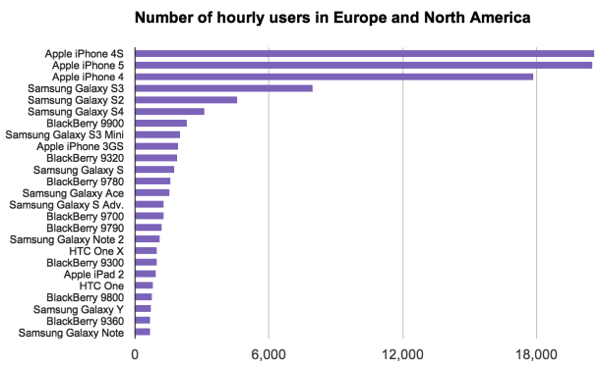 When measuring the number of people who used the phones during several one-hour-long scanning periods in 2013 in North America and Europe, the iPhone 4S was found to be the most-used handset of all, with an average of 20,608 users per hour. The iPhone 5, which grabbed the second spot in terms of usage, recorded an average of 20,529 users, and the iPhone 4, 7,973, outpacing the Galaxy S4, which had an average of 3,118.

Since the iPhone 5s and iPhone 5c have been available only since the end of September, they rank lower thanks to their lower market penetration.

An interesting finding of the Actix study is that while Android phones are the most popular worldwide, they rank low in actual usage in terms of average MB consumed per hour. As you can see from the table image below, first place in this metric goes to the iPhone 5, while the Galaxy S3 grabbed fourth spot, right after the iPhone 4S and 4. 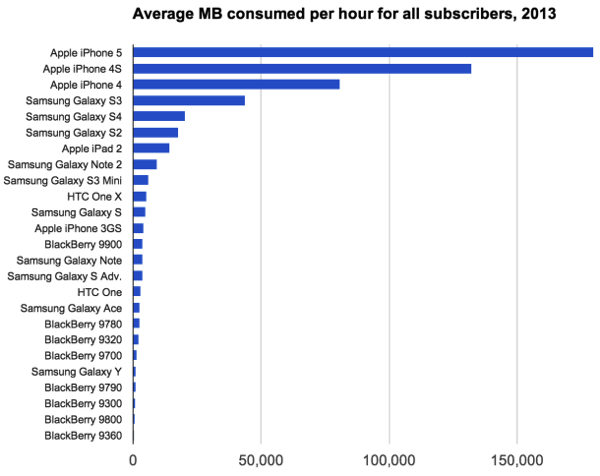 Neil Coleman, Director of Global Marketing at Actix says: “Networks have been struggling to keep up with the relentless growth in data demand. In the past the transition that drove data consumption was from feature phone to smartphone. Now it’s the upgrade path from low-end to high-end smartphones. Each generation adds 40 percent additional network traffic by device.”

Have you checked your data usage recently?