This morning Apple launched a new iPod touch powered by the A8 CPU found in the iPhone 6 and iPhone 6 Plus. The update also added the 8MP iSight camera found in the company’s smartphone, making this the biggest update for the iPod touch in nearly three years, after many thought it was ready to disappear.

TechCrunch reveals in its hands on with the new iPod touch some benchmark results, tested with Geekbench. What we see here is a slightly slower CPU clock speed of 1.10GHz versus the iPhone 6 at 1.38GHz:

The processor appears to be running at 1.10GHz per core, vs the iPhone 6’s A8 processor, which clocks in at 1.39GHz. The Geekbench scores clock in at 1379 and 2440 right out of the box with as much idle state as I could manage. This means that the iPod touch A8 processor is under-clocked slightly from the iPhone 6, which is not surprising given the battery constraints I mentioned above. It also appears to have 1GB of RAM.

As you can see from the screenshots below, the new iPod touch has 1GB of RAM and its model name is iPod7,1, running iOS 8.4 (Build 12H143, which you can download here). 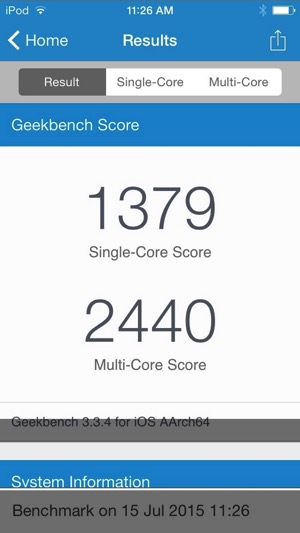 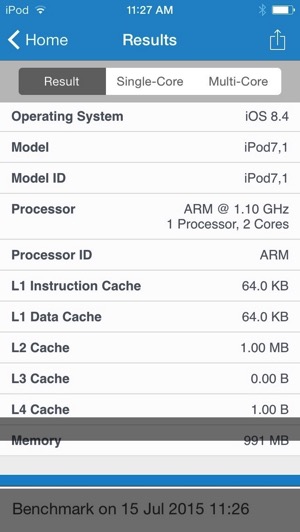 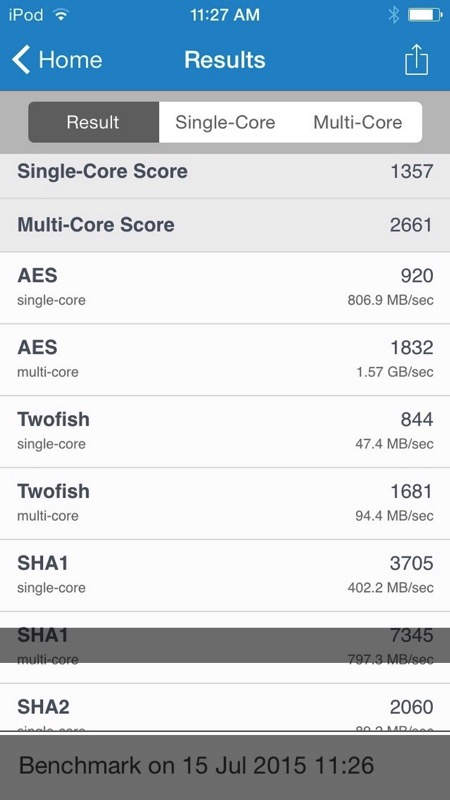 Matthew Panzarino posits the new iPod touch as the “new point-and-shoot” that can also play thousands of games, even going so far to say it could be “the new Gameboy.”

For those that do not need cellular connectivity but want the latest hardware found in Apple’s iPhone 6 models (jumping from A5 to A8 is huge), this latest update brings the iPod touch back to life. While many hoped for larger screen sizes, that would have come at an added cost. Just expect that update to come in a couple years.