Nearly half of Irish voters say the government has done the right thing by appealing the European Commission’s ruling instructing the iPhone maker to repay $18.9billion CAD in back taxes to Ireland, reports the Irish Times.

The Irish Times/Ipsos MRBI poll results released today reveals that Irish voters support the government in its decision. When asked whether the government was right to appeal the ruling, 47% answered with yes, 39% said no, and 14% had no opinion. 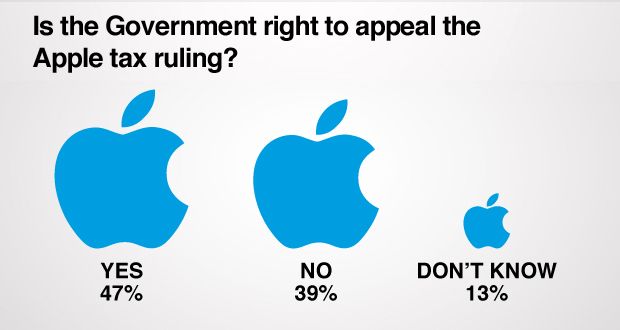 The strongest supporters of the appeal are Fine Gael supporters, the poll reveals, with 61% of them favouring the Government’s decision. Gael is seconded by Fianna Fáil supporters, and Labour voters seem to close the circle.

Against the appeal are Sinn Féin voters and supporters of the Independents and smaller parties.

After two years of in-depth investigation, the European Commission handed down a ruling earlier in August ordering Apple to pay up to $18.9 billion (plus interest) in back taxes to the Irish government. The EU Commission concluded that Apple received “illegal tax benefits” between 2003 and 2014, allowing the iPhone maker to pay “an effective corporate tax rate of 1% on its European profits in 2003 down to 0.005% in 2014.”