Is Apple Making Refund Claims as Hard as Possible? 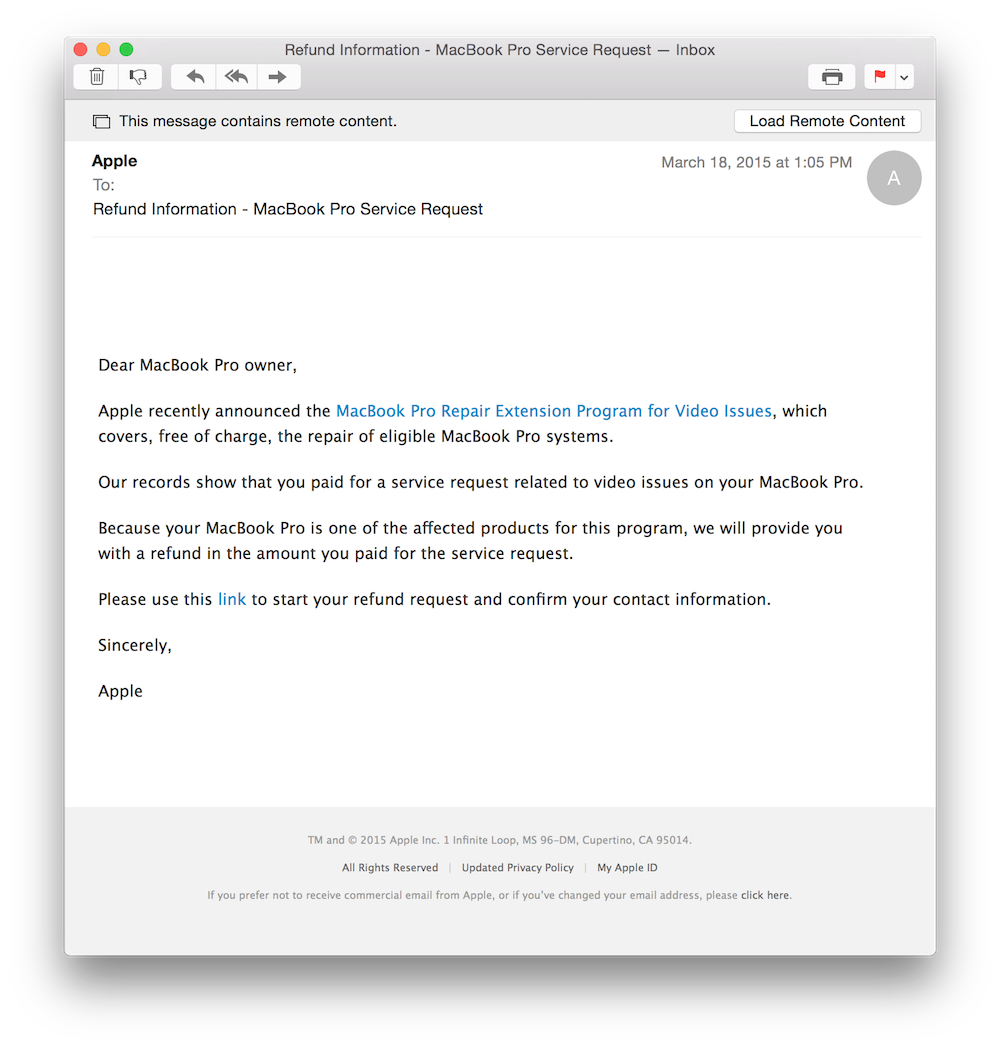 In a new blog post, Jonathan Zdziarski has shared his recent experience in claiming a refund from Apple, against a repair he had paid to have made a few years back but was later covered as a recall item from Apple. However, he now believes that Apple may have joined the ranks of big companies with recalls of defective merchandise, who make it as difficult as possible for the customer to obtain a refund for the repair.

“I received an email from Apple today informing me that a repair I’d paid to have made some years back was later covered as a recall item from Apple. Cool, I thought, they’re going to give me a refund for something that they finally admit was their fault. After verifying the authenticity of the email (headers came straight from Apple’s network), I visited their website for more information.Sure enough, this is a legitimate refund program from Apple, probably the result of the settlement of a class action suit of some sort”.

The author says that after spending 27 minutes on the phone with Apple’s support, they informed him that he would need to go into the Apple store he had the repair done at and obtain a receipt, in addition to “the work order number, the serial number, and other information that Apple should already have well within their computer system files”. The support agent informed him that they do not have access to such information.

Ironic that their email system was well aware of my service record: “Our records show that you paid for a service request related to video issues on your MacBook Pro”

Would you be willing to spend an entire day hunting down some old work order from a store that might not even have it? Is Apple really making refunds harder to claim?

Apple's new Crash Detection feature, available on iPhone 14 and the company's latest Apple Watch models, is designed to automatically contact emergency services in the event of a severe car crash.  However, it can sometimes mistake a rollercoaster ride for a car crash (via Reddit). One Reddit user found this out the hard way when...
Nehal Malik
12 mins ago

Amazon announced on Wednesday a new lineup of Fire TV Omni televisions, this time with QLED and also its “smartest TV lineup ever.” The new Fire TV Omni QLED Series is available in 65 and 75-inches, with 4K Quantum Dot Technology (QLED) displays and full-array local dimming for up to 96 zones. Dolby Vision IQ […]
Gary Ng
15 mins ago