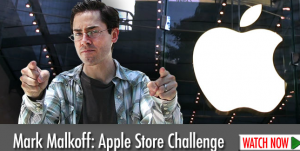 Apple Stores are pretty liberal as they let people do pretty much anything inside their stores. Comedian Mark Malkoff pushes the limits to what can be achieved inside Apple Stores in New York City. It’s pretty hilarious–check it out below (Flash required):

Okay, now excuse me while I try the same thing down at the Pacific Centre Apple Store.

We’re rounding the corner into another month and Bell Media today has shared its list of what’s new on the Crave streaming service for February 2023. February is Black History Month and Crave has highlights featuring Black creators, talent, and cultural figures with various curated special collections. One upcoming title is the TSN and Crave Original […]
iPhoneinCanada.ca
20 mins ago