Apple announced at the end of October iTunes 11 would be delayed until November to “get it right”. As we’re closing in on the end of November, it appears Apple is set to launch iTunes 11 in the “next days” according to MacRumors.

A user in their forums posted an image of what appears to be German music distribution service Feiyr requesting record companies to submit pictures of their artists for an imminent iTunes 11 launch: 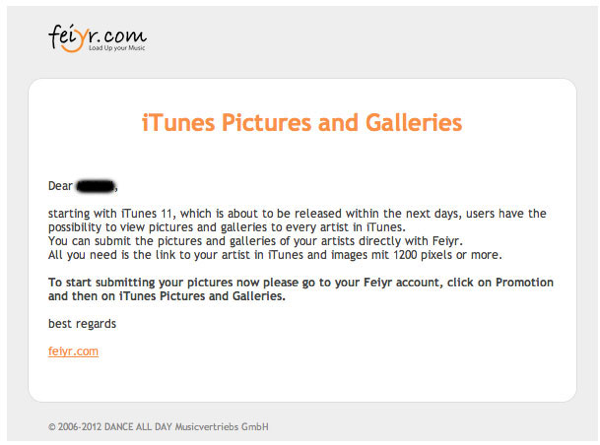 iTunes 11 is set to be what Apple calls “a beautiful new rendition” and is widely expected to be a major overhaul of the company’s media software.

Samsung's annual Unpacked event is being held tomorrow, February 1st. Unveiling the latest flagship devices, including the Galaxy S23 series. It's likely that there will also be other surprises to be had. Here's how you can watch the digital live-streamed event and not miss a moment. Each year, Samsung hosts its Unpacked event and reveals...
Steve Vegvari
18 mins ago

Xbox, PlayStation, and Nintendo will reportedly be skipping E3 2023 as the large video game conference returns for an in-person event. Slated to run from June 13th to the 16th at the Los Angeles Convention Center, the three large publishers will not have a presence on the showroom floor, says a report. According to IGN,...
Steve Vegvari
50 mins ago