Apple has launched their annual iTunes 12 Days of Christmas event in Canada (and the UK). We previously told you the event would start December 26th and go until January 6th, 2012. Last year’s event started three days earlier.

Customers will get 12 free downloads in total, with a new freebie appearing for 24 hours only. In Canada, downloads can be accessed by visiting websites from the Canada.com network, such as the Vancouver Sun or National Post. 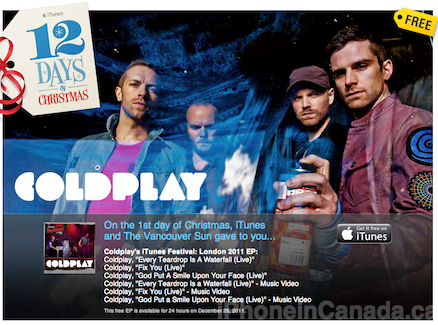 Day 1 brings us free downloads from Coldplay at their recent live performance at the iTunes Festival in London earlier this year.

Today’s free download is Coldplay’s iTunes Festival: London 2011 EP. Prior to releasing Mylo Xyloto in October, Coldplay took the stage at the historic Roundhouse in London this past summer for the iTunes Festival. Relive their dynamic performance of new singles and old favourites. Make sure to check out their latest album below.

There are three live performances available: Every Teardrop is a Waterfall, God Put a Smile Upon Your Face, and Fix You, along with accompanying live videos for each song (about 60MB each).

Coldplay has always been a favourite band of Apple and Steve Jobs. The group previously performed at the ‘Remembering Steve’ tribute held at Apple’s headquarters back on October 19th.